Genprex Inc (NASDAQ: GNPX) has seen a spectacular rise in recent weeks from a start point under $0.25 to recent highs of $5.75 Genprex is what small cap biotech dreams are made of. The stock has quickly attracted a fast growing shareholder base who sees GNPX going way higher.

GNPX took off on January 22 after the Company announced the FDA granted Fast Track Designation for Genprex’s Oncoprex™ immunogene therapy in combination with EGFR inhibitor osimertinib (AstraZeneca’s Tagrisso®, which had worldwide sales in 2018 of $1.86 billion, $2.31 billion in the first 9 months of 2019 and is currently AstraZeneca’s highest grossing product) for the treatment of non-small cell lung cancer (NSCLC) patients with EFGR mutations that progressed after treatment with osimertinib alone. Oncoprex is comprised of the TUSC2 (Tumor Suppressor Candidate 2) gene complexed with a lipid nanoparticle. TUSC2 is the active agent in Oncoprex. Genprex is preparing to initiate a Phase I/II clinical trial evaluating Oncoprex in combination with osimertinib, as well as a new Phase I clinical trial evaluating Oncoprex in combination with a checkpoint inhibitor.

Genprex Inc (NASDAQ: GNPX) is a clinical stage gene therapy company developing a new and potentially life-saving approach to treating some of the world’s most deadly cancers based upon a novel proprietary technology platform. Genprex lead product candidate, Oncoprex™ immunogene therapy for non-small cell lung cancer (NSCLC), uses the company’s unique, proprietary platform which delivers cancer-fighting genes by encapsulating them into nanoscale hollow spheres called nanovesicles, which are then administered intravenously and taken up by tumor cells where they express proteins that are missing or found in low quantities.

We are developing Oncoprex, our lead product candidate, to be administered with targeted therapies and immunotherapies for NSCLC. We are also conducting preclinical research with the goal of developing Oncoprex to be administered with targeted therapies in other solid tumors, and with immunotherapies in NSCLC and other solid tumors. In addition, we have conducted and plan to continue research into other tumor suppressor genes associated with chromosome 3p21.3, as well as other potential applications of our immunogene therapy platform. Our current research and development pipeline is shown below

Our lead product candidate, Oncoprex, consists of a TUSC2 gene encapsulated in a positively charged nanovesicle made from lipid molecules with a positive electrical charge. Oncoprex is injected intravenously and can specifically target cancer cells, which generally have a negative electrical charge. Once Oncoprex is taken up into a cancer cell, the TUSC2 gene is expressed into a protein that is capable of restoring certain defective functions arising in the cancer cell. Oncoprex has a multimodal mechanism of action whereby it interrupts cell signaling pathways that cause replication and proliferation of cancer cells, re-establishes pathways for programmed cell death, or apoptosis, in cancer cells, and modulates the immune response against cancer cells. Oncoprex has also been shown to block mechanisms that create drug resistance.

GNPX CEO Rodney Varner, JD stated “Genprex is excited to receive this important FDA designation. In addition to potentially facilitating and expediting our pathway to approval, we believe that this FDA designation validates our plan to commercialize Oncoprex immunogene therapy in combination with EGFR inhibitors for the treatment of lung cancer. We hope that Fast Track Designation helps us bring our gene therapy to patients more rapidly and that our unique gene therapy platform is more widely recognized for its potential in cancer treatment.”

To Find out the inside Scoop on GNPX Subscribe to Microcapdaily.com Right Now by entering your Email in the box below 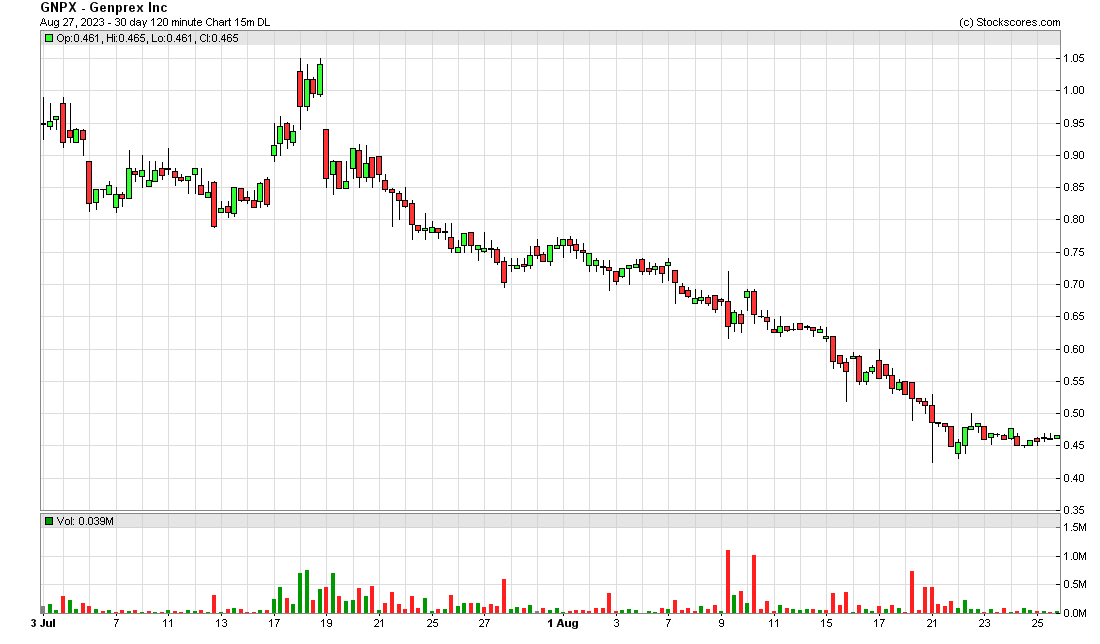 GNPX took off on February 11 after the Company announced it signed an exclusive license agreement with the University of Pittsburgh for a diabetes gene therapy that may have the potential to cure Type 1 and Type 2 diabetes, which together currently affect approximately 30.3 million people in the U.S, or 9 percent of the U.S. population. Genprex’s licensed diabetes gene therapy technology works to reprogram alpha cells in the pancreas into beta-like cells, restoring their function, thereby replenishing levels of insulin.

The diabetes gene therapy was developed by lead researcher and Harvard graduate, Dr. George Gittes, at the Rangos Research Center at UPMC Children’s Hospital of Pittsburgh, he stated:

“One of the biggest advantages of this gene therapy is that it could eliminate the need for insulin replacement therapy for diabetic patients. Lifting this huge burden for the millions of patients who must continuously monitor blood glucose levels and inject insulin daily would be a breakthrough in modern medicine. This therapy has the potential to truly disrupt the diabetes market.“

According to the American Diabetes Association, more than 30 million Americans have diabetes, and approximately 1.5 million Americans are diagnosed with diabetes every year. Diabetes patients have the continuous burden of checking and monitoring their blood glucose levels and injecting insulin on a daily basis. Without effective management of diabetes, patients are at risk of stroke, hyperglycemia, cardiovascular disease, diabetic ketoacidosis and extremity amputation. Diabetes is the seventh leading cause of death in the U.S.

Rodney Varner, JD, is a co-founder of Genprex and has served as our President, Chief Executive Officer and Secretary, and as Chairman of our board of directors since August 2012. Mr. Varner served as a partner of the law firm Wilson & Varner, LLP, since 1991. Mr. Varner has more than thirty-five years of legal experience with large and small law firms and as outside general counsel of a Nasdaq-listed company. Mr. Varner has represented for-profit and non-profit companies at the board of directors or senior management levels in a wide variety of contractual, business, tax, and securities matters, including technology transfers, licensing, collaboration and research agreements, clinical trial contracts, pharmaceutical and biologics manufacturing and process development contracts, state and federal grants, including NIH and SBA grants, corporate governance and fiduciary issues, and real estate matters. Mr. Varner served as counsel in company formation, mergers and acquisitions, capital raising, other business transactions, protection of trade secrets and other intellectual property, real estate, and business litigation. Mr. Varner is a member of the State Bar of Texas and has been admitted to practice before the United States Court of Appeals for the Fifth Circuit and the United States Tax Court. He has been a registered securities representative and founder of a company that is a licensed securities broker-dealer. Mr. Varner received his BBA, with high honors, from Texas A&M University and his J.D. from The University of Texas School of Law.

$GNPX CEO, Rodney Varner, is presenting today at #NobleCon16. A video webcast of Mr. Varner’s presentation will be available for playback at the link below approximately 24 hours following his live address: https://t.co/UA0TlWGwek pic.twitter.com/Lm8z9v52Ca

Thus, given the changing landscape in NSCLC and the recent Fast Track Designation, the Company believes prioritizing the combination therapy of Oncoprex with osimertinib represents the most efficient way to advance its lead drug candidate through the clinical process for FDA approval, to have the best commercial success in the $17.9 billion global lung cancer market and to make its treatment available to patients as soon as possible.

Currently trading at a $84 million market valuation GNPX is debt free and fully founded going forward having smartly cashed in on their rising stock price to secure much needed funding. GNPX has quickly amassed a large and growing shareholder base that believes GNPX is just getting started. We will be updating GNPX as events unfold so make sure you are subscribed to Microcapdaily so you know what is going on with GNPX.

Disclosure: we hold no position in GNPX either long or short and we have not been compensated for this article.