Puget Technologies Inc (OTCMKTS: PUGE) is on the move northbound rising up out of the triple zeroes and trading $1.5 million in dollar volume on Monday alone after the Company appointed a new CEO, Albert Mayer Cohen; a seasoned executive who participated in a number of special acquisition company (SPACs) projects which raised over $200,000,000. Mr. Cohen has indicated he plans to expand the management team and bring the BOD up to 9 members as well as negotiate suitable revenue generating acquisition targets. PUGE has runner in its blood skyrocketing in late 2021 from double zeroes to $0.017 highs. Currently under heavy accumulation PUGE has legions of shareholders and a growing international following that are looking for a return and eclipse of the $0.017 and beyond.

Reverse mergers can be more explosive than biotech’s when the incoming Company has real value but is undiscovered to investors and many RM stocks that we have covered on this website have gone from pennies to dollars. Two of the biggest recent SPAC runners we reported on were HRBR which we first profiled at $0.26 which is now trading over $2.50 per share and TSNP which we reported on in the triple zeroes before it went to multi dollars.

Puget Technologies Inc (OTCMKTS: PUGE) is a clean sec filing SPAC reverse merger play that has under $250k in liabilities with 4,745,728,041 shares outstanding. The Company was originally incorporated in the State of Nevada on March 17, 2010, and It was initially organized to engage in the distribution of luxury wool bedding products produced in Germany. Its principal executive offices, originally in Fort Lauderdale, Florida, are currently located at 1200 North Federal Highway, Suite 200-A; Boca Raton, Florida 33432. PUGE has never filed for bankruptcy, receivership or similar proceedings. From 2015 until July of 2020, PUGE was inactive as its prior management resigned leaving it indebted and without business operations. Since July of 2020, with the assistance of its Parent and strategic consultant, Qest Consulting Group, Inc., PUGE has eliminated most of its debt and resumed filing of reports to the Commission.

Most of PUGE’s efforts during the period from 2015 until July of 2020 involved first, repudiation of the series of 8% convertible notes issued by prior management under terms which current management considered toxic but, after the Registrant and its management were sued by two of the noteholders in the United States District Court for the Southern District of New York (Case No. 15-cv-08860 entitled Adar Bays LLC v Puget Technologies Inc. and Hermann Burckhardt and Case No. 15-cv-09542 entitled Union Capital LLC v Puget Technologies Inc. and Herman Burckhardt), lacking adequate funds to defend such actions PUGE entered into settlement agreements and until July of 2020, was active only in conjunction with seeking to discharge such liabilities. As a material subsequent event, the 8% Convertible Notes payable have been either converted, paid or otherwise resolved, consequently, PUGE is no longer indebted under the terms of any of the aforementioned notes nor is there is any outstanding or threatened related litigation.

To Find out the inside Scoop on PUGE Subscribe to Microcapdaily.com Right Now by entering your Email in the box below 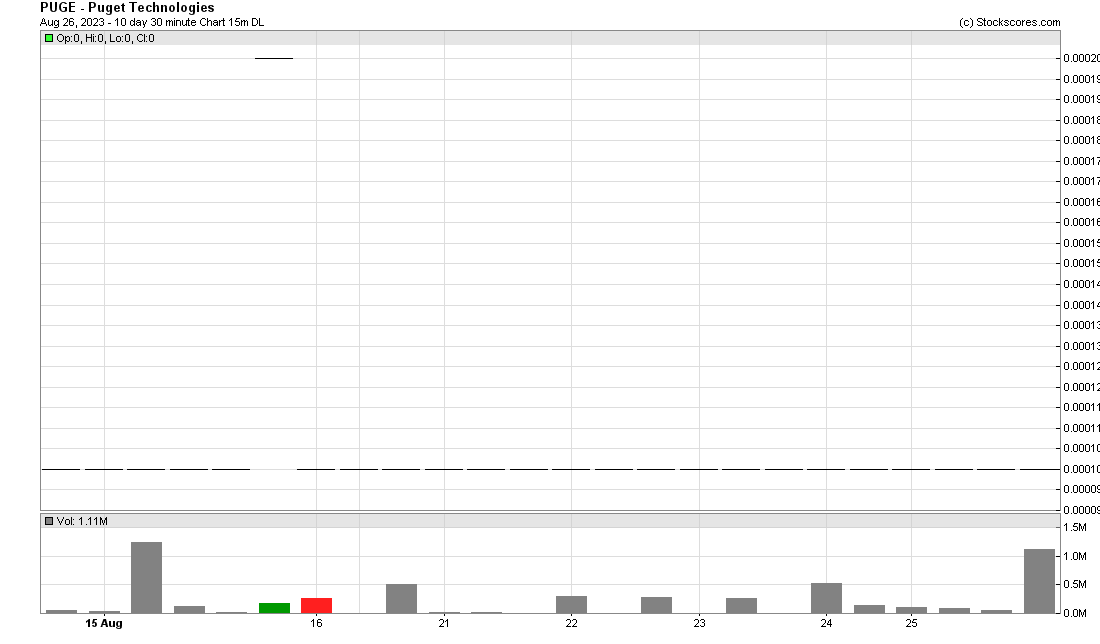 On Monday, March 28, 2022, Thomas Jaspers, PUGE’s secretary, treasurer and chief financial officer and the sole remaining member of the BOD, elected Mr. Albert Mayer Cohen, as the Company’s new president and chief executive officer as well as as a member of the BOD. Messrs. Jaspers and Cohen have indicated they will continue a nationwide search for qualified candidates in order to bring membership of the BOD up to nine persons and to recruit qualified executives as officers.

PUGE new CEO, Albert Mayer Cohen is a seasoned executive who participated in a number of special acquisition company (SPACs) projects which raised over $200,000,000. Mr. Cohen cofounded AMC Consumer Services which is still active today. He also cofounded Quarum Capital, LLC, a New York consulting firm in which he remains active assisting private and public companies expand and fund their businesses. Mr. Cohen also worked in real estate acquiring 241 Fifth Avenue in New York City with a consortium for construction of a twenty-story residential condominium building, and, 5 Beekman Place in lower Manhattan for $58 million, part of a much larger $200 million plus project. Mr. Cohen owns a valuable intellectual property portfolio including a number of patents mostly in water treatments in construction.

Microcapdaily first reported on PUGE on September 30, 2021 when PUGE was under $0.005 before it ran to $0.017 in October saying at the time: “Puget Technologies Inc (OTCMKTS: PUGE) is making a major move northbound out of the triple zeroes to recent highs near a penny. The stock is quickly gaining traction among small cap investors and starting to attract some big players. Currently under heavy accumulation PUGE is looking to break out of its current trading range and blaze a path along the likes of Enzolytics or Tesoro and break out into a whole new dimension; with recent highs of $0.0095 PUGE is looking for a blue-sky breakout into copper land. PUGE has got a lot of investors behind it and it’s easy to see why; the Company has been making big moves bringing on new CEO seasoned healthcare management professional Karen Fordham and executing on every level. The stock is already “Pink Current” and the Company has announced some major acquisitions in the works including Behavioral Centers of South Florida LLC (“BCSF”), an LOI to acquire D & D Rehab Center, Inc., (“D & D”) based in Hialeah, Florida. D & D’s total revenues (unaudited) for the calendar years ended December 31, 2019 and 2020 were $3,595,291 and o $3,635,240, respectively, with profits of $221,252 and $252,242. They are also in negotiations to acquire Florida Behavioral Center, Inc. (“FHS”), and Glades Medical Centers of Florida LLC (“GMC of Florida”), a Florida limited liability company. FHS’s total revenues for the calendar years ended December 31, 2019 and 2020 were approximately $3.9 million and $4.1 million, respectively, and revenues for GMC of Florida for the calendar years ended December 31, 2019 and 2020 were $700,000 and $500,000, respectively.”…..all this fell through however and PUGE went back to triple zeroes.

Currently trading at a $4.2 million market valuation PUGE is an SEC filer and a perfect RM SPAC candidate. There are just 4,745,728,041 shares outstanding and since management has lowered the authorized shares to 5 billion, they are just about capped out and cannot issue many shares without a BOD authorized increase in the AS. PUGE is an exciting story in small caps, as we keep saying, reverse mergers can be more explosive than biotech’s and PUGE certainly has potential here, it’s got a significantly more attractive share structure than either TSNP or HRBR did and its priced cheap here, with no convertible debt on the books and little chance for dilution. As we said before, PUGE is currently under heavy accumulation and has legions of shareholders and a growing international following. It’s got liquidity, momentum, a low float and a large gap to fill back to $0.017; a break over and its blue skies ahead for PUGE. We will be updating on PUGE when more details emerge so make sure you are subscribed to Microcapdaily so you know what’s going on with PUGE.

Disclosure: we hold no position in PUGE either long or short and we have not been compensated for this article.