The Gloves Come Off on Elite Pharmaceuticals Inc (OTCBB:ELTP) Elite Pharmaceuticals Inc (OTCBB:ELTP) has popped many times before in the past none though matched the move it made in January 2014 to highs over $0.90 per share. Since than ELTP has floundered and the stock has not matched the growth of the Company which now boasts several FDA approved products and very significant revenues.

Currently ELTP trades below a dime with its 52 week low at $0.0333. The stock is highly liquid for OTCBB and regularly trades over $100k per day in dollar volume. ELTP has a significant shareholder base some of who are active on Investorshub chat boards.

Elite’s lead pipeline products include abuse-deterrent opioids which utilize the Company’s patented proprietary technology and a once-daily opioid. These products include sustained release oral formulations of opioids for the treatment of chronic pain. These formulations are intended to address two major limitations of existing oral opioids: the provision of consistent relief of baseline pain levels and deterrence of potential opioid abuse. 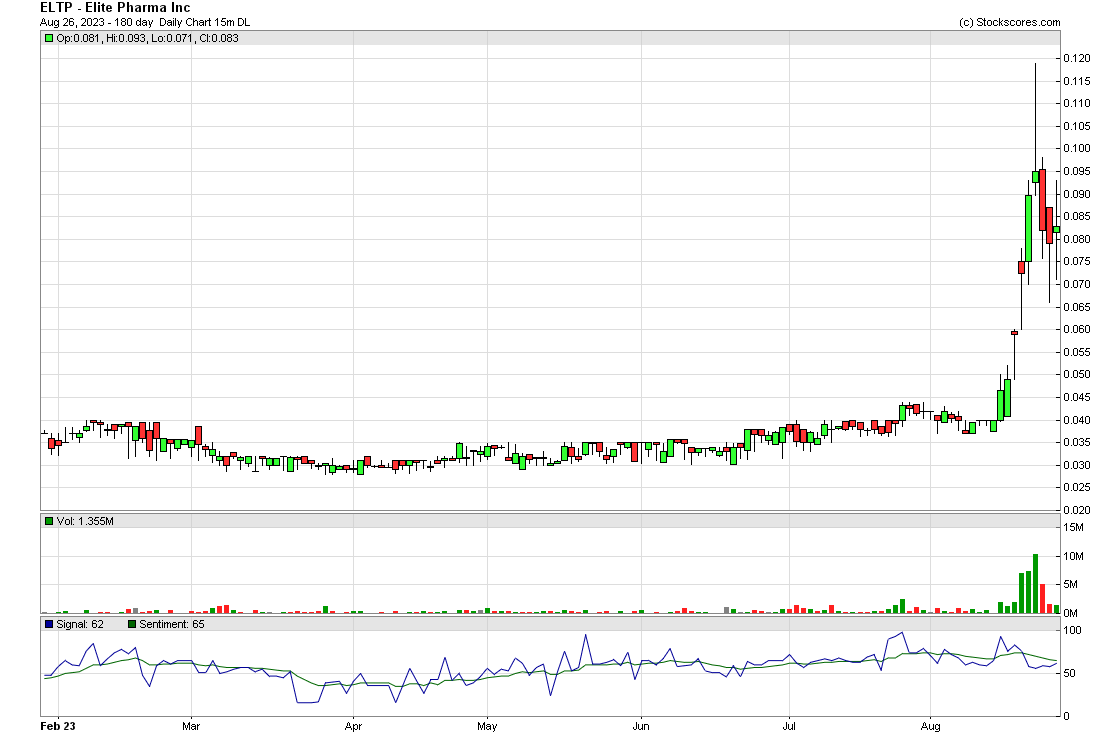 Microcapdaily has been covering Elite Pharma for years, we noted on November 14, 2014 – Elite Pharmaceuticals Inc (OTCBB:ELTP) made a highly explosive move up earlier this year off its base at a dime the stock saw highs over $0.90 per share on significant volume. Currently hovering over recently established $0.30 support ELTP continues to be one of the top traded stocks on the entire OTCBB: ELTP has been around for many years and used to trade on the Amex stock exchange where it once saw highs of $22 per share. The Company was delisted to the OTCBB in 2009 where it sat dormant for several years before the recent explosion in price and volume.

In December ELTP announced it received approval from the US Food and Drug Administration (FDA) for a generic version of Adderall XR®, an extended-release mixed salt of a single entity Amphetamine product (Dextroamphetamine Saccharate, Amphetamine Aspartate, Dextroamphetamine Sulfate, Amphetamine Sulfate) with strengths of 5 mg, 10 mg, 15 mg, 20 mg, 25 mg, and 30 mg tablets. The product is a central nervous system stimulant and is indicated for the treatment of Attention Deficit Hyperactivity Disorder (ADHD). According to IQVIA (formerly QuintilesIMS Health) data, the branded product and its equivalents had total U.S. sales of $1.3 billion for the twelve months ending October 2019.

Generic Adderall XR is jointly owned and the second product approval for our Elite and SunGen Pharma LLC collaboration. Elite will manufacture and package the product on a cost-plus basis. Lannett Company, Inc. will be the exclusive U.S. distributor.

ELTP revenues are impressive – On February 10 ELTP reported results for the third quarter of fiscal year 2020 ended December 31, 2019. Consolidated revenues for the Third Quarter were $5.1 million, an increase of approximately 88% as compared to revenues for the comparable quarter of the prior fiscal year. The increase in revenues was largely attributed to revenues from the two products launched during the 2020 Fiscal Year, generic immediate release Adderall® and Dantrolene Capsules as well as strong growth in revenues relating to the sales of Isradipine capsules.

Currently trading at a $77 million market valuation ELTP does have $1.8 million in the treasury,  $24 million in assets and $7.7 million in current liabilities which has caused significant dilution. ELTP is an exciting story in small caps with a number of FDA approved drugs already on the market reporting significant sales – ELTP reported $13,049,340 in revenues for the 9 months ended December 31, 2019 up from $6.2 million for the same period in 2018. ELTP has fast become an Investors favorite with its plans to move to a higher exchange things could soon turnaround. We will be updating on ELTP when more details emerge so make sure you are subscribed to Microcapdaily so you know what’s going on with ELTP.