The Inside Scoop on Kraig Biocraft Laboratories Inc (OTCMKTS: KBLB) Recently the Company said it is preparing to transfer production back to Prodigy Textiles, its Vietnamese subsidiary.  During the COVID-19 lockdown, when the Company opted to furlough its non-essential staff, the Company shifted its spider silk production operations focus to its US research facility.  The Company is now ready to transition the majority of its production back to Vietnam as soon as the silkworm rearing cycle allows.

Kraig Biocraft Laboratories Inc (OTCMKTS: KBLB) is a biotechnology company focused on the development of high performance polymers. Kraig works in cooperation with leading universities in the fields of genetics and genetic engineering to develop new recombinant fibers and materials which the company believes will have broad commercial applications. For years Kraig labs has been focused on the production of a transgenic silkworm incorporating specific gene sequences from the golden orb weaving spider. These specific gene sequences inserted are to enable the silkworm to spin a new recombinant fiber which incorporates spider silk proteins. With the scientific breakthrough announced on September 29, 2010, Kraig Labs is now working to commercialize the transgenic silkworms to compete in the garment industry silk market.

The value for the Chinese raw silk market alone is 3-5 billion per annum. With the creation of 20 separate transgenic silkworms, all with unique properties, Kraig Labs is now working at an accelerated pace to build upon their first generation transgenic organisms to develop their second generation of transgenic silkworm incorporating spider silk proteins. The scientists nearly doubled the strength of the silkworm with these specific spider gene insertions. Their second generation of transgenics were completed in 2011. These second generation organisms are to be compared with the strength, flexibility and resiliency of the native spider in which the gene sequences are derived from. These fibers which will match the strength of spider silk are expected to compete in the technical textiles market valued in excess of 120 billion per annum. The 3rd generation organisms are currently in the planning phase. These organisms are expected to spin fibers exceeding the strength of native spiders and may incorporate gene sequences that release an antibiotic, or to help reduce scarring with use in bandages.

KBLB has been busy; the Company announced in April it successfully developed a new technology platform, based on a non-CRISPR gene editing knock-in knock-out technology. Other than the silkworm’s remaining specifically desired native silk protein elements, the Company is now able to produce nearly pure spider silk. The new technology has a purity rate that is about ten times greater than Dragon Silk, a fiber that the Company developed with its previous tools. Dragon Silk has already demonstrated to be tougher than many fibers used in bullet proof vests and the Company expects that the increased spider silk purity, created using this new approach, will yield materials beyond those capabilities. This new system utilizes the Company’s eco-friendly and cost effective silkworm production system, which is significantly more advanced than any of the competing methods.

To Find out the inside Scoop on KBLB Subscribe to Microcapdaily.com Right Now by entering your Email in the box below 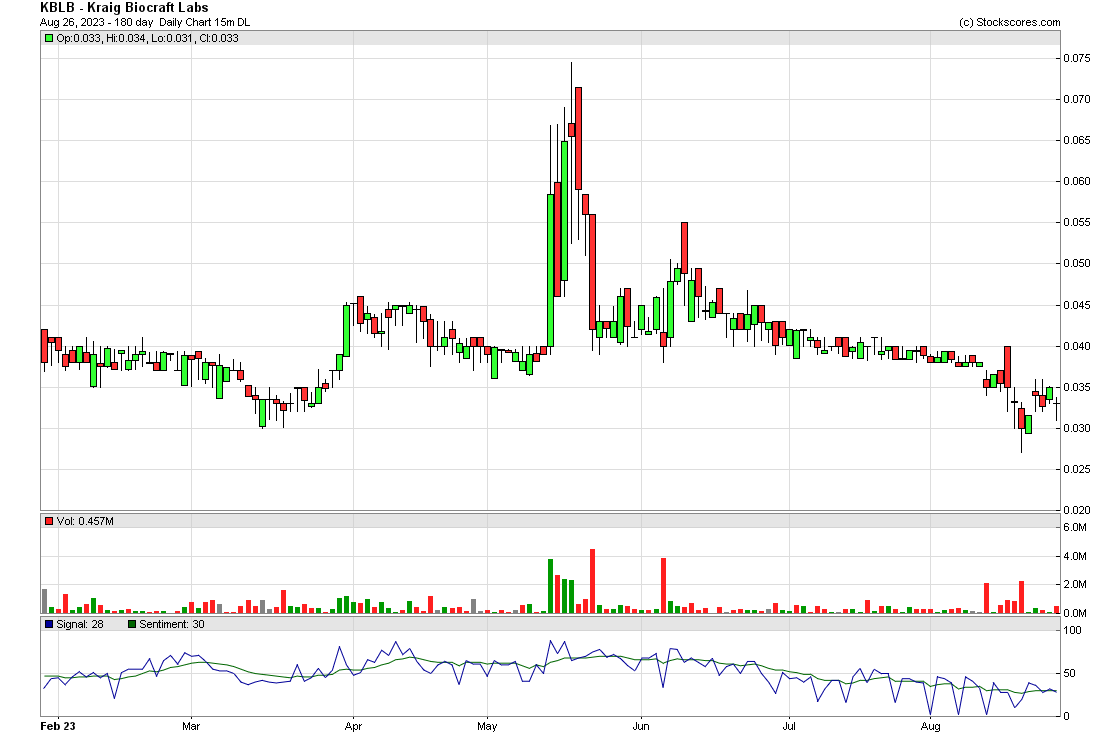 The Company said it is preparing to transfer production back to Prodigy Textiles, its Vietnamese subsidiary.  During the COVID-19 lockdown, when the Company opted to furlough its non-essential staff, the Company shifted its spider silk production operations focus to its US research facility.  The Company is now ready to transition the majority of its production back to Vietnam as soon as the silkworm rearing cycle allows.

During this pandemic, the Company has continued to advance and strengthen its production operations.  Through vigorous testing of its Dragon SilkTM and Monster Silk® lines, the Company identified its best performing and hardy silkworms ideally suited for large scale production. This milestone is the result of a dedicated effort by its U.S. staff, going far beyond standard material performance testing.  This first production cycle of 2020, at the Company’s Vietnam factory, will utilize these top performing transgenics, forming a solid foundation for the continued 2020 production scale up.

The Company anticipates rapid scale up of its recombinant spider silk and will use this year’s first production run to ship materials are dedicated to fulfill an outstanding order, by one of the Company development partners. The following production runs will be to address fiber requests made by additional potential development partners and to grow the breeding population.

On June 9 KBLB announced it has submitted its formal application to list the Company’s common stock on the Nasdaq Capital Market. The Company’s application for uplisting, to the Nasdaq Capital Market, is subject to approval based on the ability to meet Nasdaq requirements. The Company intends to satisfy all of the applicable listing requirements, however, no assurance can be given that this application will be approved. During the Nasdaq review process, the Company’s common stock will continue to trade on the OTCQB under its current symbol, KBLB.

“After significantly strengthening our technology, business model, and corporate governance, to position Kraig Labs for future growth, an uplisting to the Nasdaq Capital Market is the natural evolution for the Company and our shareholders.  We are pleased to be working on the process with the Maxim Group for this raise of up to $24 million,” stated Kim Thompson, Kraig Biocraft Laboratories’ CEO and Chairman of the Board. “Kraig Labs has been blessed with loyal shareholders, and we expect that moving to Nasdaq will raise the Company’s visibility and expand our shareholder family.”

Currently trading at a $137 million market valuation KBLB is fully reporting OTCQB. KBLB has been around for years developing their transgenic silkworm incorporating spider silk proteins; a disruptive technology that addresses several multi-billion dollar markets. The Company has solid leadership behind it in CEO Kim Thompson and has already been featured in mainstream media. There could not be a more exciting time for KBLB as they move into the production phase, commence larger scale silk production and go to market. We will be updating on KBLB when more details emerge so make sure you are subscribed to Microcapdaily so you know what’s going on with KBLB.

Disclosure: we hold no position in KBLB either long or short and we have not been compensated for this article.