Cannabis Sativa Inc (OTCMKTS: CBDS) started 2020 with a bang running from $0.46 low’s to highs over $1.50 per share. While the stock has dropped off since than speculators are looking for a move back up.

CBDS has distinguished itself from other cannabis plays in the US by acquiring and establishing meaningful business lines that produce real sales. PrestoDoctor accounts for the majority of CBDS revenues; over 40,000 users have registered to consult with PrestoDoctor’s 15+ licensed physicians across the United States. PrestoDoctor currently offers services in California and Nevada, and is actively targeting expansion into multiple additional states in the coming months.

Cannabis Sativa Inc (OTCMKTS: CBDS) bills itself as a licensor of cannabis related intellectual property, marketing and branding for cannabis based products and services, operation of cannabis related technology services, and ancillary business activities. CBDS licenses the “hi” and “White Rabbit” brands, holds a U.S. patent on the Ecuadorian Sativa strain of Cannabis, a U.S. Patent for a marijuana lozenge; a Cannabis-based pharmaceutical composition for the treatment of hypertensive disorders by submucosal delivery and trade secret formulas and processes, and operates subsidiaries including: PrestoDoctor® Wild Earth Naturals® and iBudtender. The Company is the official licensee for Virgin Mary Jane Brand In addition, CBDS seeks strategic partners for acquisition of operating companies, intellectual property and other assets which fit within the CBDS corporate vision.

Microcapdaily has been covering CBDS for years reprorting on January 1, 2015: “CBDS” is making an explosive move up after the Company announced the reorganization of its wholly owned subsidiary, KUSH, as a separate strategic business unit with former United States Senator Mike Gravel at the helm. KUSH will focus on the development and marketing of innovative new cannabis products for the recreational and medicinal markets including a proprietary lozenge called the “Kubby.” CDBS hit the bb’s in December 2013 at around $0.75 a share and quickly became one of the top most traded stocks on the entire exchange making a spectacular run to highs of $0.18 a share as pot stocks ruled the bb’s. CBDS collapsed with the rest of sector in March after the CANN halt and has been dropping since. 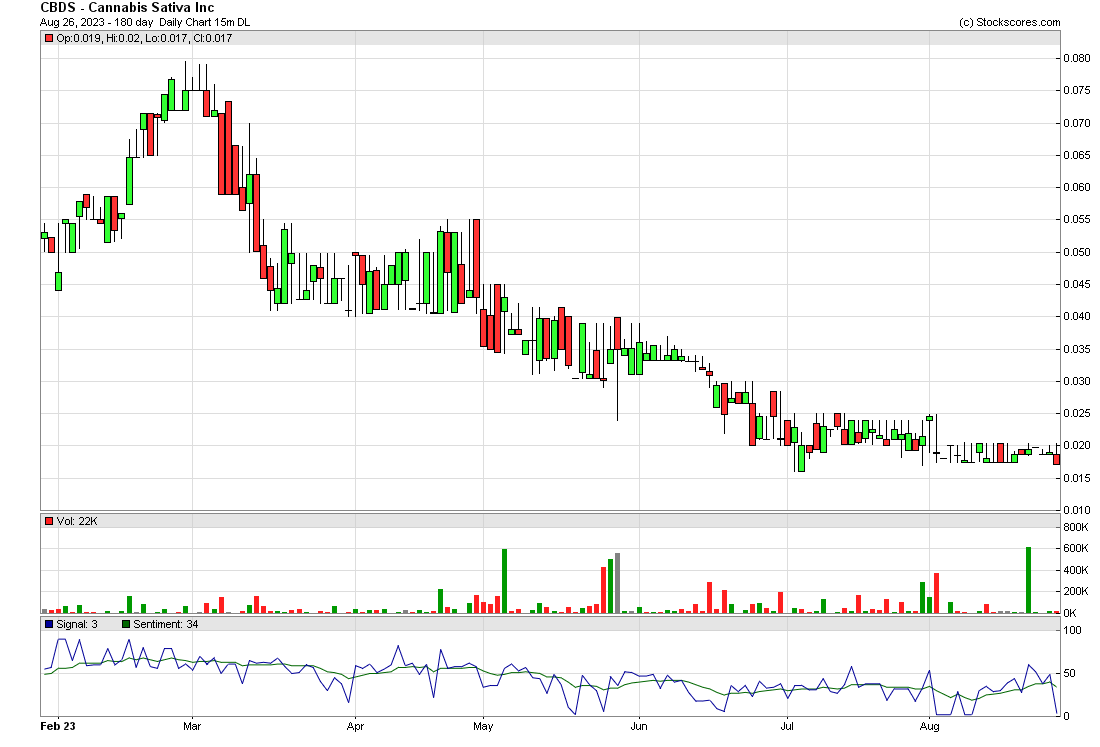 In August of last year CBDS acquired a controlling interest in PrestoCorp an online telemedicine platform providing access to knowledgeable physicians for a safe and confidential way to get a medical marijuana recommendation using secure video conferencing technology. Appointments through PrestoDoctor’s website are generally completed in 10-15 minutes, and can be scheduled and completed in the same day. This convenience eliminates the need for patients to travel to an in-person appointment or wait in line at a clinic. More than 40,000 users have registered to consult with PrestoDoctor’s 15+ licensed physicians across the United States. PrestoDoctor currently offers services in California and Nevada, and is actively targeting expansion into multiple additional states in the coming months.

CBDS numbers are growing, in November the Company reported Q3 financial results; for the nine-month period ended September 30, 2019, revenue increased 72%, to $705k, from a year ago while gross margin improved 71% from the comparable 2018 period ($413k vs. $241k), at 59% of revenue. PrestoDoctor’s patient growth and geographic expansion were the primary drivers for the improved revenue and margins. Operating loss for the nine months ended 9.30.19 was $1.7 million, an improvement of $1.4 million (42%) from the same period in the prior year. The Company continues to see benefits of its aggressive cost control program, implemented two years ago. Operating costs (SG&A) are down 36% from YTD Q3 2018, and down 66% from YTD Q3 2017, primarily due to lower professional and consulting fees.

Currently trading at a $17 million market valuation CBDS had $220k in the treasury, manageable debt and growing sales reporting $704,998 for the 9 months ended September 30, 2019 up from $400k in the same period last year. CBDS is an exciting story in small caps – CBDS has distinguished itself from other cannabis plays in the US by acquiring and establishing meaningful business lines that produce real sales. PrestoDoctor accounts for the majority of CBDS revenues; over 40,000 users have registered to consult with PrestoDoctor’s 15+ licensed physicians across the United States. CBDS is one of the original pot stocks on the OTCQB, the stock has a long history of big moves rising to $18 a share in 2014 and $9 twice in 2017 and 2018; when MJ heats up CBDS is a good place to be. We will be updating on CBDS when more details emerge so make sure you are subscribed to Microcapdaily so you know what’s going on with CBDS.