The Long and Short On Hemp Inc (OTCMKTS: HEMP) Hemp Inc (OTCMKTS: HEMP) stock price recently dropped below a penny as the entire sector has fallen on hard times. What separates HEMP is the massive volume the stock continues to trade. Even now with a stop sign designation from OtcMarkets which states that HEMP is either dark or defunct the stock continues to be among the most active in small caps regularly topping $250,000 in daily dollar volume.

Microcapdaily has been reporting on HEMP for years reporting on November 14, 2014: “HEMP” is making a highly explosive move up with the rest of the sector after hitting a recent low of $0.027. Investors still remember the spectacular run this one made earlier this year from well under a penny to highs of $0.34. Pot stocks are heating up with Marijuana on the ballot in Florida in November. The massive publicity that surrounds such an affect naturally trickles down to the bb’s. The last time HEMP got hot it ran close to 4000% in 5 weeks.

According HEMP its 70,000 square foot industrial hemp processing facility, on over 9 acres in Spring Hope, North Carolina, is the only one of this magnitude in North America.

Microcapdaily has always tried to stay positive on any Company we cover; we noted back in 2017 on HEMP: If pot stocks heat up again and it looks like they are doing just that, HEMP might be the perfect trade vehicle to cash in on this coming trend. Currently trading at a $77 million market valuation HEMP is one pot stock that deserves to be on investors radars here. 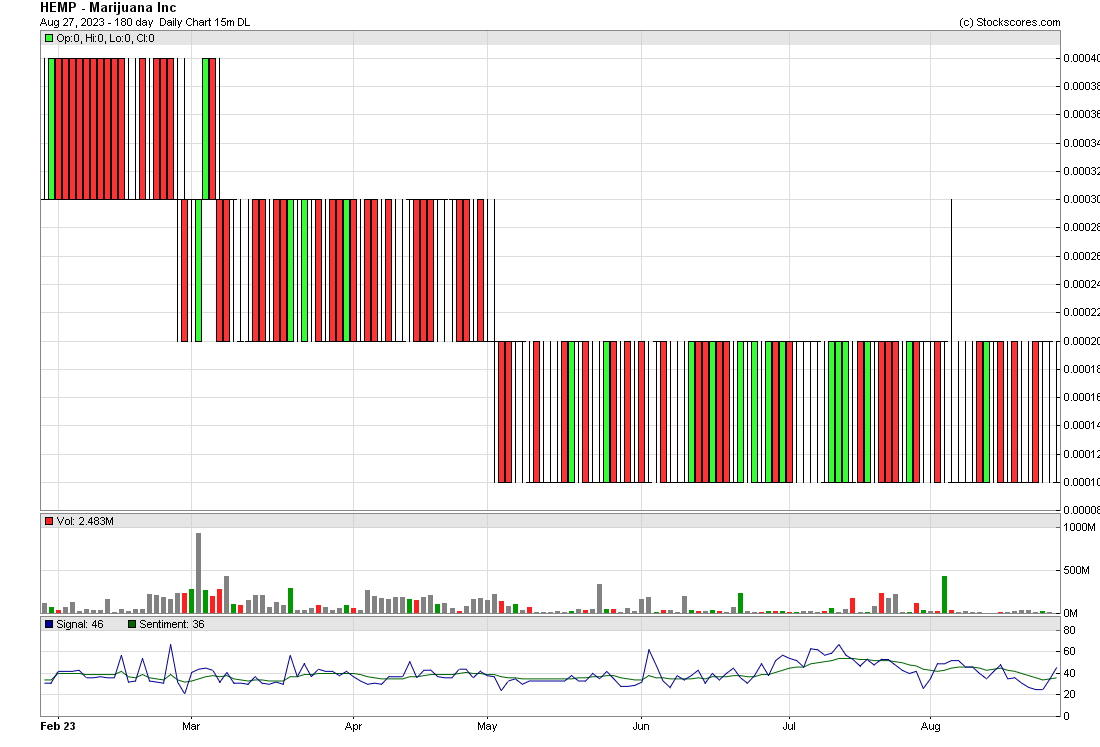 Bruce Perlowin is the CEO of HEMP; he has a colorful history and was the subject of the  #1 most watched CNBC documentary of all time, “Marijuana Inc”. In this interview Bruce shares the latest news from around the country and about Hemp Inc – a publicly traded company he founded to help create a better world.  Mr Perlowin may not have a marketing degree but he has proved himself a master at it getting himself featured in stories and interviews over the years on main stream press including Barrons, The Associated Press, New York Times, Newsweek, Fox News, Wall Street Journal, PBS, Market Watch and NPR among others.

On October 24, 2018 in a press release titled “GrowLife, Inc. Announces CNBC Coverage of Company’s Expansion into Canadian Marketplace During Cannabis Legalization” it states towards the end of the article: In addition to the company’s placement in CNBC, GrowLife was also recently featured in the following news outlets: Microcap Daily: ‘Growlife Inc (OTCBB:PHOT) Soars After Mention on TV Special’ – So HEMP has mentioned us too!

HEMP continues to put out a lot of press: In January the Company reported it will be opening The King of Hemp Store™, its flagship, brick-and-mortar retail store at 330 East Beale Street in Kingman, Arizona. The 5,000 square foot retail space will be utilized for the store within a former Wells Fargo building in the entertainment district of Kingman or “Old Town Kingman”. The store will carry hemp and cannabidiol (CBD) topicals such as lotions, creams, shampoo, conditioner, luxury gifts and items such as gemstone encrusted hemp candles, high-quality hemp CBD pre-rolls, as well as industrial hemp products like hemp string and hemp denim jeans.

The King of Hemp Store is a flagship, brick-and-mortar retail store in Kingman, Arizona is expected to open in March. The store will carry hemp clothing topicals, shampoos, conditioners and CBD and CBG products like flower and more. pic.twitter.com/X0wn6XNAWK

Currently trading at a $5.5 million market valuation HEMP has not released any financial documents since 2017 which has resulted in a stop sign designation from OtcMarkets which states that HEMP is either dark or defunct. The Company listed $6.6 million in current liabilities on its books in 2017 which has resulted in significant dilution over the years. But one has to be impressed with HEMP daily trading volume which averages between $100k and $250k per day. And one cannot discount Mr. Perlowin proven ability at getting himself and HEMP featured in stories and interviews on main stream press. As we said back in 2016 – if pot stocks heat up again HEMP is one to watch. We will be updating on HEMP when more details emerge so make sure you are subscribed to Microcapdaily so you know what’s going on with HEMP.