The Mineral Company (OTCMKTS:IGEX) On Watch as Company Says a Series of Important Announcements Coming Including New CEO

The Mineral Company (OTCMKTS:IGEX) has seen a significant surge in volume over the past few days and is currently under accumulation as things begin to happen behind the scenes. CEO Sergio Bellosta Suarez just announced his resignation and the Company stated it will soon announce the appointment of the new CEO who has already been selected.

Already investors are speculating this could be a good thing moving forward are a number of mergers in the final phase of due diligence. Management has stated it has $8.4 million in financing lined up and available for being applied in order to push these deals forward. The Company had also previously announced an agreement with American CODISINCA CORP for the acquisition of 37,000 tons of fluvial sands for $10 million USD. However, the deal was put on hold. Now, investors are speculating these deals can move forward.

The Mineral Company Pte LTD (OTCMKTS:IGEX) is involved in the lithium and graphene industries. The first acquisition was completed on 27th January. 2022, and a second in February. The Company is actively and diligently working on an imminent merger with two attractive industry participants to continue offering shareholders and investors: smart investing, growth, and quick and recurring earning profits thanks to the solvency and the strong financial support of the Company’s preferred shareholder(s).

Anytime before market opens next Monday Nov. 21th, $IGEX will be uploading into tbe OTC Markets website the first of a series of very important announcements. Long Life IGEX!

Management states it has $8.4 million financing lined up and available for being applied in order to push the first of the THREE MERGERS which are in the final phase of due diligence according to IGEX. Management also hopes that during the coming week they will be able to give a definitive confirmation about the cancellation and return to the treasury of IGEX the 400 million common shares already agreed upon and currently pending refinement on the part of the Transfer Agent.

I think we can all rest assured this CEO change is inline with what we’ve been working towards 🤙🏻 pic.twitter.com/CRI4GIjCEZ

To Find out the inside Scoop on IGEX Subscribe to Microcapdaily.com Right Now by entering your Email in the box below 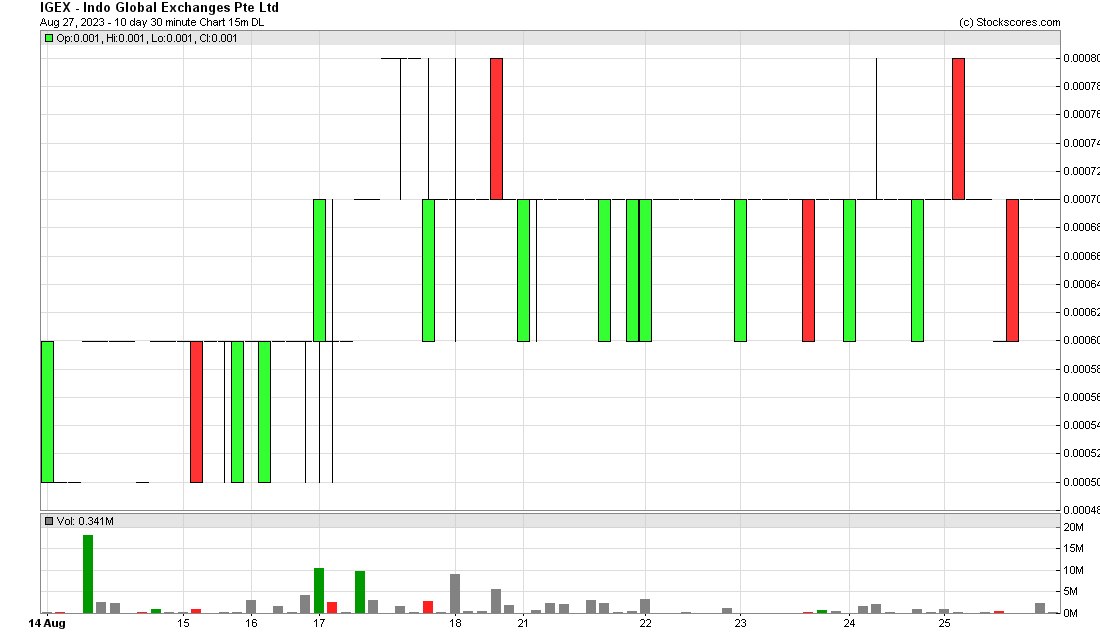 In August the Company announced that after weeks of arduous negotiations, IGEX and the American CODISINCA CORP have reached an agreement for the acquisition of 37,000 tons of fluvial sands for $10 million USD. The acquired material, which comes from Colombia, has a high concentration of minerals such as Rhodium, Lithium, and Silicon and, in lower concentrations, Ruthenium, Palladium, Silver, Gold, and Thorium, as confirmed by SGS and Bureau Veritas analyses, two of the most prestigious firms worldwide. IGEX, on the other hand, has carried out its own study with the participation of two prestigious mineral analysts from Belgium (Europe) and China. This counter-analysis results are expected to be published before the end of June. IGEX personnel has traveled from Europe to Florida (USA), where 7,000 tons of this material are stored.

The legal team of IGEX has made the necessary documental due diligence to ensure the proper legalization of the sands and that all its documentation is in order. The IGEX team has collected random samples on which to proceed with its own counter-analysis and verification of the purity of the materials to be extracted. The remaining 30,000 tons are stored in a seaport in northern Colombia, at the disposal of the company’s interest, and ready to be shipped wherever IGEX decides. Once the sands are refined and prepared for sale according to industry standards, IGEX estimates that the value of block minerals will reach minimum NINE DIGITS, even discounting transportation, handling, and refining costs, once the Lithium and Rhodium concentration is ratified in equivalent levels to those accredited by the seller.

However, several days later CEO Sergio Bellosta Suarez canceled the deal saying: “Fruit of the enormous quantity of impertinent and unfortunate phone calls and absurd and inappropriate emails CODISINCA CORP received last Thursday afternoon and all Friday made by intraday speculators and supposed non-accredited IGEX investors and fake shareholders, which have generated an unbearable amount of tension between IGEX and the seller, both parties, by mutual agreement, have resolved to cancel the option purchase agreement that bound them in relation to the high-mineral fluvial sands in the terms initially agreed upon and give each other a much needed period for reflection until the procurement of the results of the two counter-analysis IGEX commissioned to two prestigious mineral experts in Belgium and China.

Regretting the abhorrent situation caused by irresponsible and misguided third-parties in name and false representation of IGEX, we want to thank and acknowledge the formidable professionalism of the CODISINCA CORP team as well as its extraordinarily humane disposition which we have been dealing with these past few weeks. As the silver lining of this situation, the CEO of IGEX, meeting with the Board of the Preferred Shareholder of the Company all of yesterday, Sunday afternoon, analyzing the current situation and projecting the immediate future of our IGEX, has ensured that the financing ($8,440,000) from and approved by the preferred shareholder so that the already cancelled deal (sands) was closed, is maintained and available for being applied in order to finally  push the first and exciting of the THREE MERGERS which in the final phase of due diligence in perfect status, are being structured since the past November and thanks to our contribution of this important liquidity fund, we have no doubt it will be a marvelous reality in a very, very short span of time. To finish off for today, we hope during the following week we will be able to give a definitive confirmation about the cancellation and return to the treasury of IGEX the 400 million of common shares already agreed and just pending refinement on the part of the Transfer Agent.

Currently trading at a $11 million market valuation IGEX has a very clean balance sheet and has very little debt on the book with just $330,000 in total liabilities. IGEX is an exciting story in small caps, the Company’s CEO has just stepped down and said in the press release that the new CEO has already been selected. They stated on twitter the other day they have a number of important announcements coming presumably starting with the announcement of the new CEO. Management has stated it has $8.4 million in financing lined up and available for being applied in order to push the previously announced mergers forward. We will be updating on IGEX when more details emerge so make sure you are subscribed to Microcapdaily so you know what’s going on with IGEX.

Disclosure: we hold no position in IGEX either long or short and we have not been compensated for this article.