Byrna Technologies Inc (OTCMKTS: BYRN) has been heating up in recent weeks after the Company reported solid Q3 results and Investors are looking for a return over previous highs of $2.12 per share. The stock has emerged from relative obscurity in recent months to become a volume leader and top traded stock in small caps.

Byrna has been busy; the Company reported production of its Byrna® HD less-lethal personal security device commenced at its new 14,000 square foot manufacturing facility in Fort Wayne, IN on Tuesday, October 6, 2020.  The new facility is currently producing 200 units per day and management expects its production rate to increase to 500 units per day by mid-November.  Byrna plans to utilize the Fort Wayne facility to meet all of its North America demand, while its facility in South Africa, which is currently producing an average of 600 units per day, will be focused on fulfilling orders for its international customers.

Byrna Technologies Inc (OTCMKTS: BYRN) is a technology firm specializing in the development, production, t and sale of innovative less-lethal technologies and products for the consumer, military, law enforcement, corrections, and private security end markets. The Company manufactures the Byrna HD, a CO2 powered handheld personal security device designed to fill a perceived need in civilian and professional markets. The Byrna HD has the form factor of a compact handheld firearm and can launch .68 caliber impact and chemical irritant projectiles with an effective range of 60 feet. The Company also sells a 40MM Blunt Impact Projectile, under its trademarked “BIP” , which it believes is the safest 40MM non lethal munition on the market, and holds a number of patents and patents pending.

Byrna sells its products to the consumer, private security, law enforcement and military end markets in the United States, Canada and South Africa. Historically, the Company sold its products primarily to law enforcement, correctional facilities and military end markets in the United States and Canada through its SDI online store and historic relationships. The Company sells its new Byrna HD directly to consumers through a new Byrna e-commerce site and at gun shows and other events, and to dealers and distributors in the United States and South Africa. Byrna also recently received its first stocking order for 208 Byrna HD original Ready Kits (which includes the Byrna HD, a case, a spare magazine, two of its proprietary CO2 cartridges and 15 assorted Byrna HD projectiles) and ammunition from C-A-L Ranch Stores, a chain store with twenty-six locations across four states. In South Africa, we sell the Byrna® HD and related products directly and through an authorized manufacturer’s distributor.

To Find out the inside Scoop on BYRN Subscribe to Microcapdaily.com Right Now by entering your Email in the box below 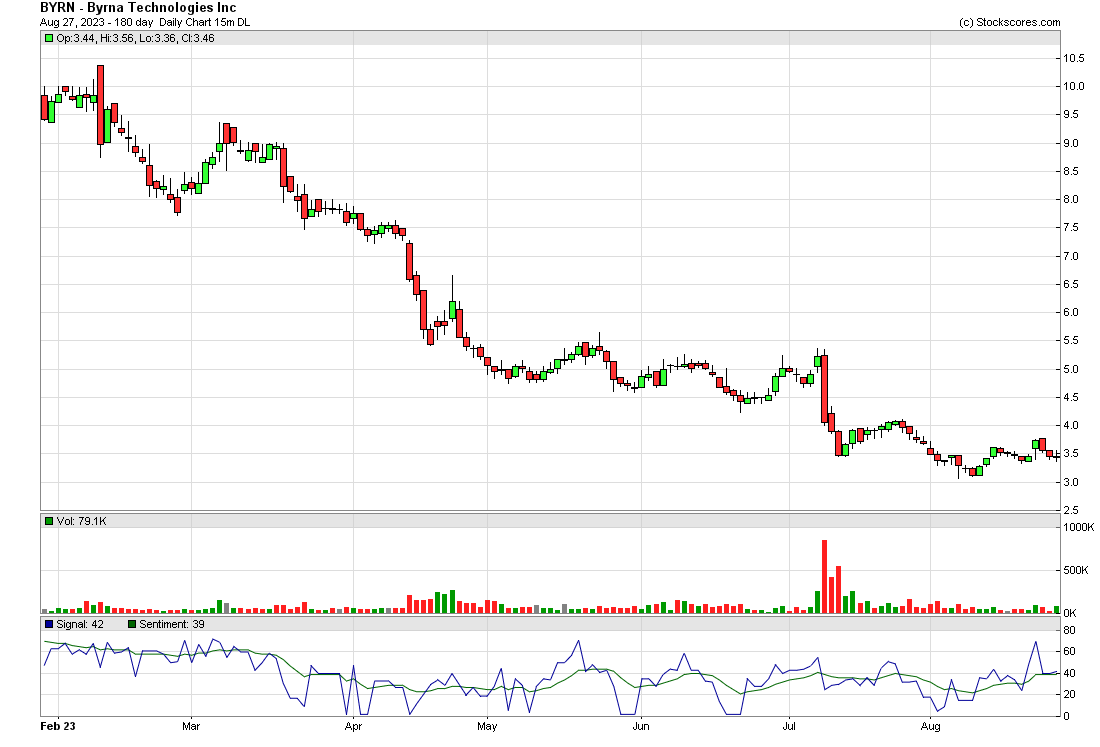 In June Sean Hannity featured Byrna on his show. Hannity suggested that perhaps non-lethal weapons such as the Byrna HD personal security device might be part of the solution to the recent events that have inspired the protests sweeping the nation over recent weeks.  As Hannity spoke, traffic to Byrna’s e-commerce site exploded with more than 160,000 web sessions from 9:00pm to 12:00am EDT (compared to 105,000 web sessions for the entire month of May). Additionally, between midnight to 5:00am, Byrna saw another 30,000 visitors to its website. Byrna received a torrent of orders.  At its peak, the Company was receiving more than one order every second.  By midnight, it had received over 4,300 orders totaling more than $2.0 million.  The Company also received numerous requests from individuals and companies around the world interested in becoming Byrna® dealers.

Bryan Ganz, Byrna Technologies’ Chief Executive Officer stated: “Byrna Technologies generated a significant increase in sales in our fiscal third quarter, both on a year-over-year and a sequential basis. The current socio-political climate has created a heightened sense of the need for effective and reliable less-lethal self-defense in both civilians and law enforcement professionals. This, coupled with increased awareness of the unique aspects of our product resulting from favorable, high-profile media coverage, drove rapid order growth for our Byrna® HD less-lethal personal security device. As we announced yesterday, we recently commenced production at our new Fort Wayne, IN manufacturing facility.  I am very proud of our team’s ability to get this new production capacity up and running nearly a year ahead of plan in order to fulfill our robust backlog and satisfy our customers’ orders, as well as capitalize on the extraordinary demand for the Byrna® HD that we expect to continue for the foreseeable future.  With Fort Wayne’s 500 unit per day capacity adding to our 600 unit per day production in South Africa, the recent additions to our management team, and investments in corporate infrastructure, we believe Byrna is now very well positioned as a formidable player in the growing less-lethal defense market. Based on our current backlog of orders, the ramp of production at our recently commissioned manufacturing facility in Fort Wayne, and the sustained production rate at our facility in South Africa, we expect revenues for the full fiscal year 2020 to be in the range of $16 – $18 million. Additionally, we expect our fiscal fourth quarter of 2020 ending November 30th to be our first quarter of positive net income, as we benefit from increasing operating leverage on continued strong sales growth.  Overall, we are optimistic about the Company’s prospects for delivering improved profitability and increased cash flow heading into the end of 2020 and entering 2021, as we work to build greater value for our stockholders.”

Currently trading at $219 million market valuation Byrna has $2 million in the treasury as well as $7 million in current assets and does carry some convertible debt on the books. The Company recently reported record revenues of $4,198,157 for the 3 months ended August 31, up from $300k in the same period last year. BYRN is an exciting story developing in small cap; the Companies flagship the Byrna HD creates non-lethal personal security devices that fire a chemical irritant projectiles accurate up to 60 feet that disarms and disables an attacker giving you several minutes to get out of harms way. The story has been gaining traction in recent months and was given a significant boost in June when Sean Hannity featured Byrna on his show. Hannity suggested that perhaps non-lethal weapons such as the Byrna HD personal security device might be part of the solution to the recent events that have inspired the protests sweeping the nation over recent months. We will be updating on BYRN when more details emerge so make sure you are subscribed to Microcapdaily so you know what’s going on with BYRN.

Disclosure: we hold no position in BYRN either long or short and we have not been compensated for this article.