Enzolytics Inc (OTCMKTS: ENZC) is making an explosive move up the charts since reversing off $0.022 lows on October 1. Recently the stock has been rocketing upwards on growing volume and is one of the few bright spots on the OTC In the current market. The stock was one of the biggest runners of late 2020 early 2021 skyrocketing from triple zeroes where we first covered it to highs well over $0.90 per share. Now that ENZC has reversed and is moving northbound it’s got plenty of room to grown and significant potential from current levels.

Last week the Company announced the completion of the first phase of the animal toxicology studies on its ITV-1 anti-HIV therapeutic. The initial toxicology study showed “no adverse effects at maximal dose of the product” and confirmed the product is safe at maximum dose, leading the way for a GLP Compliant 28-day Repeat Dose Toxicity Study. This is a major step forward for Enzolytics as it completes a significant step necessary for producing and delivering the Company’s anti-HIV therapy in Africa and Europe. Completing the toxicology study allows Enzolytics to introduce ITV-1 for use in certain African countries.

Enzolytics Inc (OTCMKTS: ENZC) is a Texas-based biotechnology company with both patented anti-HIV therapeutics and a proprietary methodology for producing fully human IgG1 monoclonal antibodies for treating infectious diseases with non-toxic passive immunotherapy. The Company has clinically tested its anti-HIV therapeutics known as ITV-1. ITV-1 is a suspension of Inactivated Pepsin Fragment (IPF), a purified extract of porcine pepsin. ITV-1 has been shown to strengthen the immune system and may be used to facilitate a broad range of applications. ITV-1 has been tested in HIV patients in a clinical trial conducted under the strict guidelines of the European Union, where it demonstrated beneficial outcomes. Additionally, the Company has created a proprietary cell line that produces fully human monoclonal antibodies that target and neutralize the HIV virus.

The Company’s scientific team, Harry Zhabilov, Joseph Cotropia MD, and Gaurav Chandra MD, pioneered the Company’s proprietary therapeutics for treating infectious diseases, including HIV-1, Hepatitis (A, B, C), rabies, influenza A and B, tetanus, and diphtheria. The Company’s therapeutics may also be used to treat Rheumatoid Arthritis and certain forms of cancer.

The Company has also pioneered a proprietary method for creating human cell lines that produce fully human monoclonal antibodies directed against many infectious diseases. One antibody (designated as CLONE 3) has been demonstrated in tests in 5 international labs to fully neutralize over 95% of all strains and viral subtypes of HIV-1 against which it has been tested.

These HIV therapeutics may be used as an immunotherapeutic treatment for individuals with HIV/AIDS. They may also be developed for use as a prophylactic and therapeutic vaccine to prevent uninfected populations from contracting the HIV virus. Treatment using the fully human anti-HIV antibody will be far superior to current ARV therapy for several significant reasons: (1) the therapy will be effective and non-toxic, (2) will not require lifetime treatment, and (3) will be far less expensive.

Thus, for the patient, immunotherapy will be remarkably different — it will be safer, provide a much-needed immunotherapeutic cure rather than requiring lifelong treatment, and costs substantially less than current antiretroviral therapy.

The Company also has created human cell lines that produce human antibodies against other infectious diseases, including rabies, influenza, tetanus, and diphtheria. As a part of its mission, the Company is testing these antibodies to prepare them for use as therapies against these diseases.

$ENZC NEW DD. No Announcement that I have seen, but Kirsten is connected to Chandra , now listed on the ENZOLYTICS Advisory Board for a Month now! Look at this Medical background , from Africa !, MIT GRADUATE in AI in Healthcare, Lecturer in Surgery !https://t.co/5NXeySNczE https://t.co/svPs0VoDbe 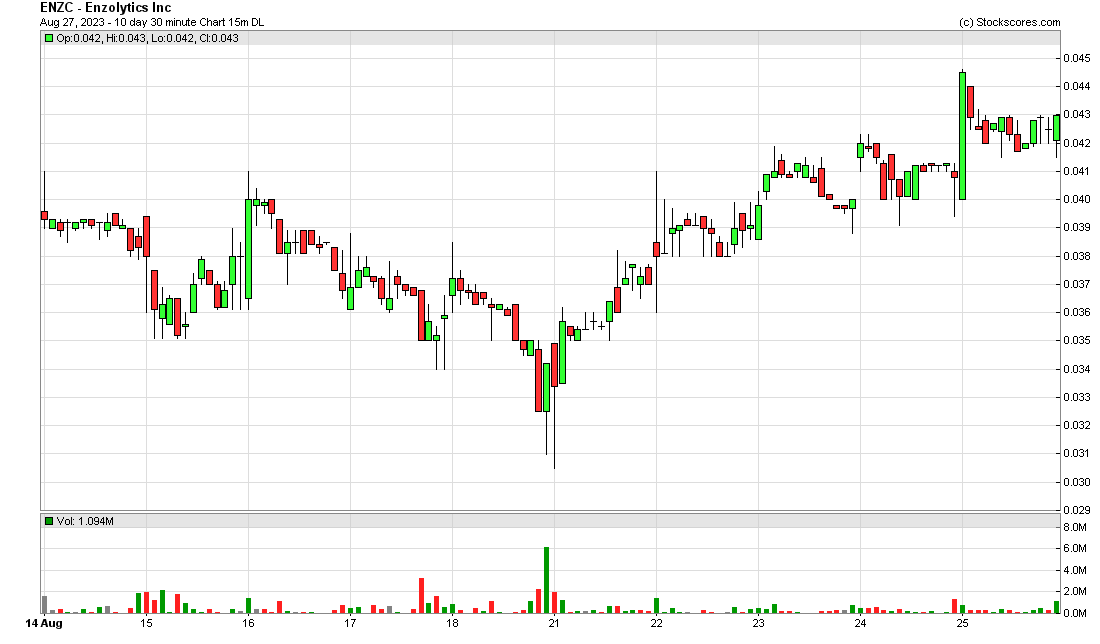 The collaboration makes possible the combination of the synergistic technologies of the two companies in discovering monoclonal antibodies against numerous pathogenic viruses. Under the terms of the collaboration, Abveris (also known as Twist Boston) will utilize human patient donor peripheral blood mononuclear cell (PBMC) samples and peptide screening tools provided by Enzolytics to perform rapid B cell screening and identify antigen-binding antibodies for further characterization by Enzolytics. The companies will initially focus on discovering antibodies targeting SARS-CoV-2.

Enzolytics’ focus is on producing fully human monoclonal antibodies targeting multiple viral infectious diseases, including SARS-CoV-2, HIV-1, Feline Leukemia virus, and Feline Immunodeficiency virus. The Company’s antibodies are produced from human “immune-B cells” obtained from convalescent individuals who have recovered from the target virus. The Company’s Artificial Intelligence (AI) platform is used to identify highly conserved, immutable target sites on viruses. Production of antibodies targeting these conserved sites on the viruses will result in the production of antibodies that are not rendered ineffective by virus mutation. These fully human monoclonal antibodies have the original antibody affinity and specificity and minimized chances of immunogenicity.

On October 5 ENZC announced the completion of the first phase of the animal toxicology studies on its ITV-1 anti-HIV therapeutic. The initial toxicology study showed “no adverse effects at maximal dose of the product” and confirmed the product is safe at maximum dose, leading the way for a GLP Compliant 28-day Repeat Dose Toxicity Study. This is a major step forward for Enzolytics as it completes a significant step necessary for producing and delivering the Company’s anti-HIV therapy in Africa and Europe. Completing the toxicology study allows Enzolytics to introduce ITV-1 for use in certain African countries. These toxicology studies will also be used in the Company’s progress toward clinical trials necessary for EMA approval. The ITV-1 therapeutic has succeeded in the clinical investigation earlier, and the Company is planning additional trials leading to EMA approval. As that approval is underway, the ITV-1 therapeutic will be provided to the Central and Eastern regions of Africa once all toxicology study phases are completed.

The Company has made significant progress on its multiple therapeutic platforms. These platforms include the Company’s ongoing development of multiple monoclonal antibodies for the treatment of numerous diseases, an AI (Artificial Intelligence) platform that makes possible rapid production of effective multiple monoclonal antibodies, including those targeting both human and animal viruses, and an effective nutritional supplement, IPF Immune™, that is currently in production.

The Company CEO Charles Cotropia stated, “With several platforms providing significant value to the Company and its shareholders, the Company is confident in the future. The Company’s strengths are its multiple technologies that will individually provide effective therapies and treatments for patients and consumers.”

Currently trading at a $138 million market valuation ENZC OS is 2,830,435,953 shares and $7 million in liabilities vs little assets. While these numbers don’t look particularly good ENZC is a stock that knows how to move, this one ran to well over $0.90 per share in early 2021 and was one of the biggest runners at the time. After well over a year of drifting downward ENZC hit 52-week lows of $0.022 and has been moving northbound since then. Stocks with such a history usually do big things again and ENZC should be at the top of speculators watch lists here, from $0.05 it’s got a lot of room.   We will be updating on ENZC when more details emerge so make sure you are subscribed to Microcapdaily.