General European Strategic Investments (OTCMKTS: GESI) has been making big gains in recent days. On Thursday GESI was still on the move hitting a high of $9.87 in early trading. GESI is being heavily promoted by a number of groups including The-FinancialNews.com linked to an aggressive google add campaign. Since they are not sending emails OTCMarkets does not show GESI is being promoted. As we said in our first article on GESI on May 25 when the stock was around $4.50 per share stating at the time: “Currently trading at a $1.2 billion market valuation GESI is not SEC reporting and has no assets besides the Lasko project which the Company values at $32.4 million on their balance sheet. They also carry $7.9 million in liabilities on the books. While the Company has 340 million shares out, only 37 million of them are free trading which is tightly held.” Note: the image to the right is the landing page for the GESI google add campaign. Several years ago, promotions on this scale were common place and GESI is a large-scale promotion trading over $4 million in dollar volume on Tuesday alone. There is nothing here that suggest a $1.7 billion market valuation which it currently trades at is sustainable. It wasn’t sustainable for HMBL either and we all know what happened to that one.  Current shareholders might not want to be around when the restricted shares become unrestricted at this valuation.

Gemerska Poloma: Through its corporate association with EuroGas Inc., GESI owns an 80%-interest in a potentially large Arbitration Award resulting from the International Arbitration proceedings of EuroGas Inc., a Salt Lake City, Utah based US public company, against the Slovak Republic, a Full Member of the European Union.

ColdPro LTD: GESI owns a 49%-interest in ColdPro LTD. (ColdPro), a private UK company specializing in waste management in the UK. ColdPro is a licensed UK-based integrated waste management business, and one of only six regulated approved authorized treatment facilities in the UK.

Transcarpathian Gold Project: The Transcarpathian region of Western Ukraine is part of one of the most important Gold Belts in Eastern Europe. The region contains around 20 gold prospects, containing an estimated 30 million ounces of gold. The Transcarpathian Region has been unexplored with limited exploration using modern techniques applied to the area. 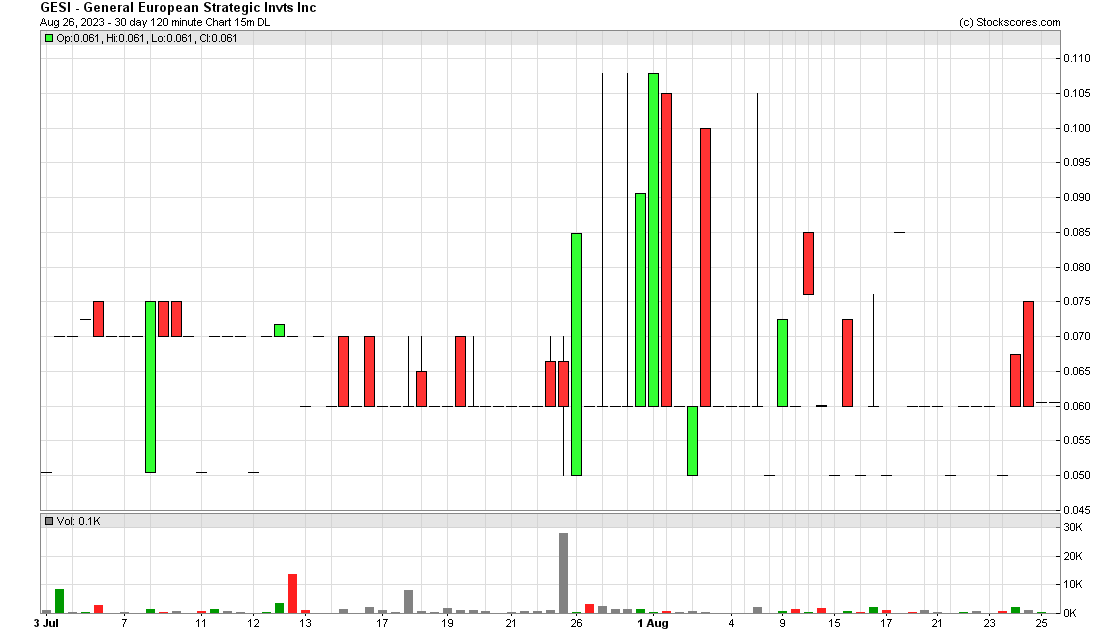 GESI came to be on September 24, 2020, after the Company merged with and into ZB. ZB was the surviving corporation in the Reverse Merger and became the Company’s wholly owned subsidiary. The assets and liabilities and the operations that are reflected in the historical financial statements prior to the Merger are those of ZB and are recorded at the historical cost basis of ZB and the consolidated financial statements after completion of the Merger include the assets and liabilities of ZB and GESI and the historical operations of GESI and ZB from the closing date of the Merger.  As a result of the Reverse Merger, GESI discontinued its pre-Reverse Merger business and acquired the business of ZB and will continue the existing business operations of ZB as a publicly-traded company.

On June 8 GESI announced a change in its Chief Financial Officer, welcoming Christopher Malone to the position. Wolfgang Rauball, GESI’s CEO, stated, “Mr. Appleby has recently had a significant increase in his workload, and as our company is maturing and evolving its business at a more rapid pace, he felt it would be in the best interest of the company and its shareholders to step down from the position of CFO. We would like to thank him for his hard work and I am pleased he will be able to continue as an independent member of our Board of Directors, and we look forward to working with him in that capacity as he brings valuable insight given his experience in the industry. However, the position of CFO is being left in good hands, as Mr. Malone also has extensive financial experience and having them both on the board is a valuable asset to our overall team.”

Christopher Malone was unanimously approved by the board to fill the CFO position, and he is the founding Director of PrOasis, a professional consulting firm, where he has spent the past 31 years managing the firm which focuses on executive management, corporate finance, strategic planning and governance for major Canadian SME organizations. Mr. Malone currently holds the positions as Chief Financial Officer and Director for an OSC registered Fund Manager and an IIROC registered Broker Dealer member. He has extensive listing, regulatory reporting and governance experience with private businesses and public companies and Exchanges in Canada and the United States. Mr. Malone’s experience stems from over 39 years in the North American workforce holding senior financial and information technology systems roles in some of Canada’s largest domestic and multi-national organizations. He also holds a CPA/CMA designation and graduated from the University of Western Ontario with a B.A. in Commerce and Economics.

Currently trading at a $1.7 billion market valuation GESI started trading in late April at $5 per share and it has been a volatile ride since then, dropping to as low as $0.84 in early April the stock has been making big gains in recent days. On Thursday GESI was still on the move hitting a high of $9.87 in early trading. GESI is being heavily promoted by a number of groups including The-FinancialNews.com linked to an aggressive google add campaign. The steady ride up every day on plenty of liquidity is nice but be careful when the bottom drops out, it will happen very fast and it will happen GESI does not have the goods to back up a $1.7 billion market valuation. We will be updating on GESI when more details emerge so make sure you are subscribed to Microcapdaily so you know what’s going on with GESI.

Disclosure: we hold no position in GESI either long or short and we have not been compensated for this article
Share
Facebook
Twitter
Pinterest
WhatsApp
Previous articleProText Mobility, Inc. (OTCMKTS: TXTM) Powerful Runner as RSA Medical Marijuana Dispensaries RSAMMD™ Confirms TXTM Reverse Merger & Lays Out Expansion Plans
Next articleSolar Integrated Roofing Corp. (OTC:SIRC) Heats Up as the Company Cancels 45 Million Shares (Record Revenues and Up Listing to National Exchange)