Livento Group (OTC Pink: NUGN) is one penny stock with big dreams and big ideas that has been in a steady uptrend in recent months looking to take out 52-week highs of $0.20 per share. NUGN was an old pot stock that was going nowhere until Livento Group went public via a reverse merger into NUGN. Since going public Livento recently submitted the application for a change of name from NuGene International Inc. to Livento Group LLC. The Company has been informed by OTC Markets that the review process for obtaining proprietary trading under Rule 15c2-11 has begun and will reflect sometime in September along with the upgrade to OTCQB.  Upon completion of this step, management intends to retire any surplus unissued authorized shares to better reflect the value of our company.

Livento has a lot going on; recently the Company’s subsidiary BOXO started two development projects and joined one post production project. BOXO plans to start another 3 project this autumn, these were secured during May 2022 and will be announced asap. Current movie projects are Carnival of Killers movie, which will be large studio movie, Running Wild and Wash mi in the river. Elisee is currently tested by large German fund and running live in several US fund management companies where it helps with investment decisions within selected portfolios. Elisee revenues have increased significantly over the past quarter. The Company is also evaluating setting of offices in Miami to create new positions accommodating senior financial managers for Elisee sales and social media profiles to boost Company presence in USA.

Livento Group (OTC Pink: NUGN) is focused on acquiring and developing companies with disruptive business models. The company recently launched BOXO Productions, its film and television production subsidiary led by top actor and producers in the industry. Livento went public via NUGN and the Company is currently in the process of changing its name to Livento Group and uplisting to fully reporting OTCQB. Livento is working on EURO DOT project where it holds 15% equity part and is preparing an IPO for the logistics Company with revenues above USD $12 million with target to deliver new acquisition and business growth under EURO DOT brand.

The Company’s operating subsidiaries include BOXO Productions; a prominent independent film and television production company that is led by an established financial, legal and entertainment team. The Company produces and funds premium content across a range of genres, championing the boldest and most original voices in modern entertainment. BOXO put together a highly experienced management team including, Petr Jákl, Ara and Martin Barab. These are Hollywood industry professionals with a very extensive track record in Tinseltown. They have access to people (and resources) that are otherwise impossible to get. The team gets access to scripts, books, new movie projects, way ahead of anyone else.

Livento’s AI software was developed internally so it’s the Company’s own proprietary system that’s tested on the major exchanges, the Dow Jones Industrial Average (INDEXDJX: DJI) being the main testing platform. It’s a system and tool that allows fund managers to test their portfolio setup in different sectors and environments, which helps by guiding them towards which type of stock portfolio they should be buying and holding for the upcoming future. Livento works on a monthly basis and is currently being tested by a large fund in Germany that trades on the German DAX Performance Index. The primary product; portfolio management system Elisee is an investment service that allows clients to choose from a select group of assets, and leverages the latest technologies to deliver the best-performing ones based on clients’ chosen attributes.

The Company’s real estate Invesment the Rezidence Geminos project was recently completed, and all units are now sold. Located in Prague, Czech Republic, this building is a newly constructed 16-unit condominium. Each unit has a front garden and a terrace or balcony. The building is a modern, energy-efficient construction that has plenty of parking. In 2019, Livento acquired the project and its construction permit. They began updating this building’s layout to reflect changes in market needs. The Geminos Rezidence project was financed in cooperation with UniCredit bank and developed internally under the supervision of an experienced team who oversaw all construction tenders and sales. The total gross sales were anticipated to be $8 million, and construction was expected to be completed in 18 months. With homebuyers obtaining mortgages, Livento has been receiving payments for the units and will be able to use the remaining balance once the bank and developer are paid. The team of professionals overseeing this project was led by Michal Zelezny, a veteran in the real estate industry with experience developing residential communities.

$NUGN update – Euro Dot IPO: Our sponsoring investment bank is currently establishing an exact valuation of the 2 companies merging into Euro Dot. We expect to receive a final number within the next 10 days, at which point our initial offering will be made & the SP will be set. 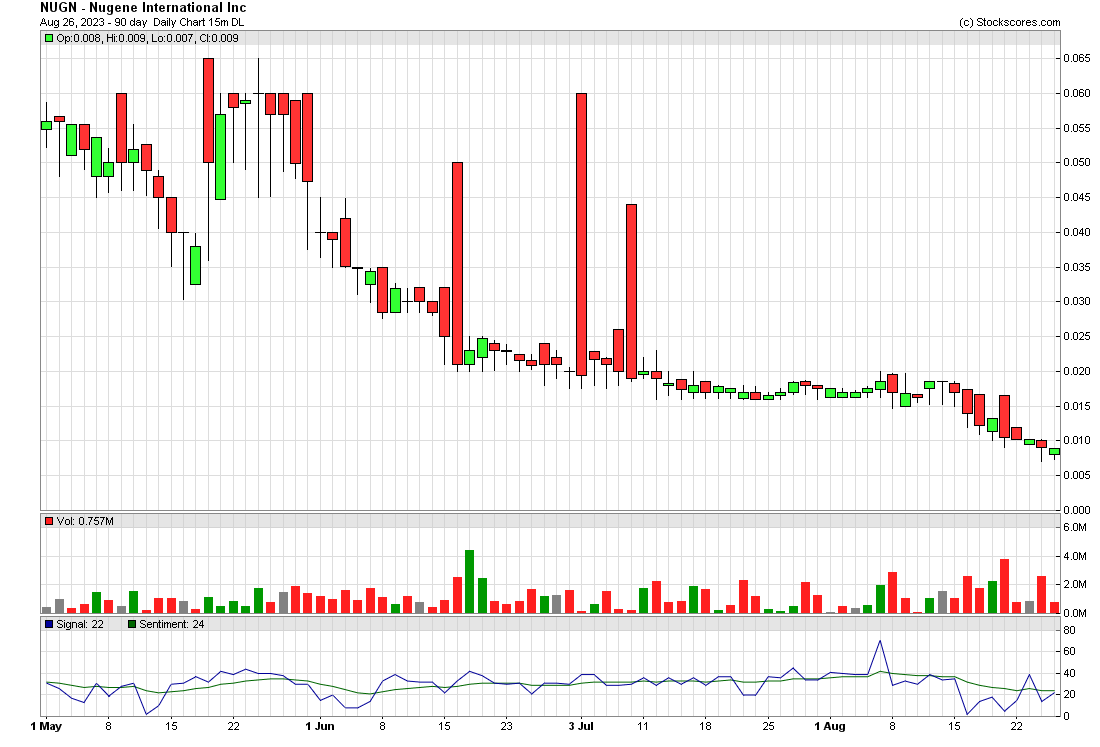 To Our Stockholders, 2021 has brought accelerated growth for Livento Group, placing us on the fast-track to trading on the public markets with the aim of upgrading to a higher exchange. The expansion of our business model into the film and television industry and onboarding of legendary Hollywood producers, the evolution of our AI program, Elise™, into larger market sectors, the approaching completion of real estate projects, and the establishment of key partnerships with influential members of the global financial community have all served to propel Livento to new horizons in a proportionately short period of time.

As always, we seek to increase shareholder value and surpass shareholder expectations in all our endeavors. We hold shareholder communication as a high priority in maintaining the integrity and transparency of our company. To this end, we would like to provide our shareholders with a material events line-up for the fourth quarter of 2022.

In May 2022, BOXO Productions announced its acquisition of interest in the post-production phase of the film “Wash Me In The River” featuring Robert De Niro which was due to hit theaters this fall 2022.  The film is scheduled to be release in theaters this September 2023, and will subsequently be distributed by Paramount Home Entertainment.

There has been considerable speculation concerning the IPO for logistics company Euro Dot, which generates over 12 million USD and will significantly boost Livento’s revenue stream upon being listed.  We expect to launch the IPO in September of 2023, following up with a number of strategic acquisitions currently being explored under the Euro Dot brand.

We are happy to announce that our film "Wash Me in the River" is in the final stages and dates to introduce the film in cinemas will be agreed upon soon so that revenues from this project will reflect in 2022 & shareholders will see revenue from this film by BOXO this year! $NUGN

Currently trading at a $28 million market valuation NUGN OS is 219,001,268 with 168,486,122 shares in the public float. NUGN has a strong balance sheet with $23 million in assets and just $475,000 in liabilities with no convertible notes. The Company is making money recently reporting $951,500 in sales for Q1 and Q2 2022 with a net income of $633,668. NUGN is an exciting story developing in small caps, currently in the process of changing its name to Livento Group with a new ticker symbol and uplsting to fully reporting OTCQB. Management’s ultimate goal is to list Livento on a senior stock exchange such as Nasdaq or NYSE. Livento has a lot going on besides the upcoming name and ticker change. The Company is working on EURO DOT project where it holds 15% equity part and is preparing an IPO for the logistics Company with revenues above USD $12 million with target to deliver new acquisition and business growth under EURO DOT brand. BOXO started two development projects and joined one post production project. BOXO plans to start another 3 project this autumn. The Company’s real estate Invesment the Rezidence Geminos project was recently completed, and all 16 units are now sold. Livento is also evaluating setting of offices in Miami to create new positions accommodating senior financial managers for Elisee sales and social media profiles to boost Company presence in USA. We will be updating on NUGN when more details emerge so make sure you are subscribed to Microcapdaily so you know what’s going on with NUGN.