Majic Wheels Corp. (OTCMKTS: MJWL) is rocketing northbound in full beast mode after the Company announced it has entered into a definitive business combination agreement with black check SPAC OceanTech Acquisitions I Corp. (Nasdaq: OTEC) currently trading for $10 on the Nasdaq that will result in Majic Wheels becoming a publicly listed company on The Nasdaq Stock Market LLC. The Companies have also entered into a Forward Share Purchase Agreement for up to $40 million committed backstop by Meteora Capital Partners and its affiliates. Currently MJWL has the skull & crossbones designation making it extremally difficult to trade, once the CE is lifted volume will increase dramatically.

Reverse Mergers can be more explosive than biotech’s when the incoming Company has real value but is undiscovered to investors and many RM stocks, we have covered on this website have gone from pennies to dollars. Two recent RM runners that stand out are TSNP/HMBL which went from sub pennies (where we first wrote about it) to several dollars per share. The other is HRBR which went from a few cents (where we first wrote about it) to $3 plus. Upon closing of the transaction, OceanTech will be renamed Majic Corp and expects to remain listed on The Nasdaq Stock Market LLC under the ticker symbol “MJWL” with a combined business value of $333,360,290 on the signing of the Merger Agreement.

Majic Wheels Corp. (OTCMKTS: MJWL) a Delaware holding corporation, intends to position itself as a player in the disruptive industries of Fintech and software development by means of multiple acquisitions. Majic Wheels’ ecosystem includes assets such as Calfin Global Crypto Exchange (“CGCX”), the world’s leading hybrid exchange, and PCEX, an Indian exchange that is transforming the B2B crypto landscape in over 250 locations within India. CGCX provides customers with a high caliber, secure, and simple-to-navigate crypto trading experience by combining four blockchain services onto a single platform. This includes a crypto exchange, merchant solutions, smart contracts, and an initial coin offering (“ICO”) platform.

The Merger Agreement includes an earn-out consideration of up to $500,000,000 USD (50 million shares, including 10 million shares subject to the RSU Incentive Plan) over the next three years, based upon certain “triggering events” regarding the performance of the Combined Company and its management. Led by a team of seasoned professionals from both traditional and digital markets, Majic Wheels has established a presence in Singapore, Malaysia, Mauritius and India, and is hoping to plant its roots in the UAE.

OceanTech Acquisitions Corp. is a blank check company formed for the purpose of effecting a merger, capital stock exchange, asset acquisition, stock purchase, reorganization or similar business combination with one or more businesses.

In our previous article on MJWL we stated: “MJWL has been on the move since Shaw Cheng “David” Chong took over as CEO and positioned the Company as a player in the disruptive industries of Fintech and Software Development. Since than the Company has up listed to “pink current” and announced their plan to move to the NASDAQ. CGCX is already doing big revenues reporting $5,281,500 in sales for the 12 months ending on December 31, 2020. For the 6 months ending on June 30, 2021, revenues were USD 5,117,136. The Company is projecting significant revenue growth over the next few years. MJWL has emerged in recent days as an investor favorite and is currently among the most actively searched and talked about stocks in small caps. MJWL is looking to blaze a path along the likes of Enzolytics or Tesoro and break out into a whole new dimension – Tesoro went to multi dollars – a break over $0.265 and its blue skies ahead for MJWL. Microcapdaily first reported on MJWL in May when the stock was sub $0.05 before it ran to 52-week highs of $0.265 on the CGCX acquisition.”

R/M on NASDAQ with $OTEC ✔️

To Find out the inside Scoop on MJWL Subscribe to Microcapdaily.com Right Now by entering your Email in the box below 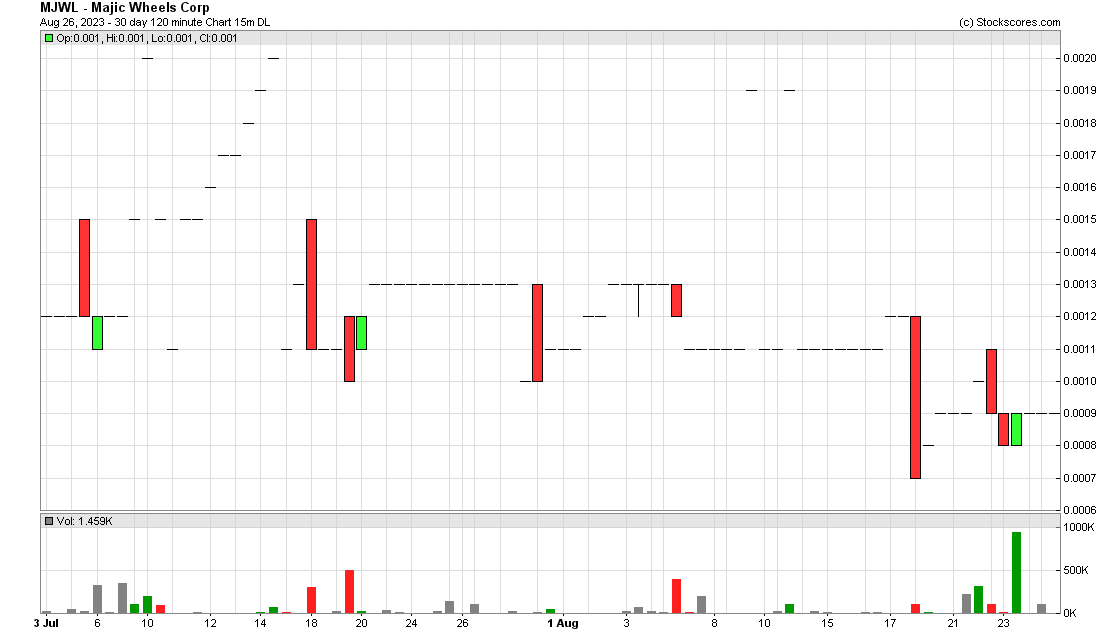 The proposed Merger Agreement represents a transaction value of approximately $200,000,000 USD (20 million shares). Additionally, certain recipients as further described in the Merger Agreement may receive earn-out consideration equal to a maximum of $500,000,000 USD (50 million shares, including 10 million shares subject to the RSU Incentive Plan) upon certain “triggering events” that are based on the Combined Company’s future revenue. Upon closing, after giving effect to any redemptions and any funded PIPE investment, and before expenses, the Combined Company can receive a maximum of $106,100,000 in cash held in trust by OceanTech, which will include the guaranteed backstop arrangement for the trust. The boards of directors of Majic Wheels and OceanTech have unanimously approved the proposed business combination, which is expected to be completed in 1H 2023, subject to, among other things, the approval by OceanTech’s and Majic Wheels’ shareholders, satisfaction of the conditions stated in the Merger Agreement and other customary closing conditions, including a registration statement being declared effective by the U.S. Securities and Exchange Commission (the “SEC”), the receipt of certain regulatory approvals, and approval by The Nasdaq Stock Market to list the securities of the Combined Company. Nelson Mullins Riley & Scarborough LLP is serving as legal advisor to OceanTech. Norton Rose Fulbright US LLP is serving as legal advisor to Majic Wheels.

Sathyanandham Anguswami, CEO of Majic Wheels, comments: “Majic Wheels has spent the past year transforming and refocusing its core business, whilst simultaneously innovating it during a historic macro-economic downturn. As a result, we are excited to be emerging with a value proposition that is stronger than ever, and for which this Merger Agreement with OceanTech will be invaluable.”

« The Nasdaq Stock Market LLC under the ticker symbol $MJWL with a combined business value of $333,360,290 on the signing of the Merger Agreement. »https://t.co/1QSsAvdzMx

Currently trading at a $45 million market valuation MJWL OS is 3,876,606,192 with 937,395,105 shares in the float. According to the Company’s last OTC Disclosure statement, MJWLs annual report dated March 31, 2022, the Company has $237 million in assets vs. $2.7 million in liabilities. These are huge numbers for an OTC stock, especially one that has the dreaded skull & crossbones designation from OTCMarkets. Currently it’s very difficult to buy MJWL and once the CE is removed volume will increase dramatically. On Tuesday MJWL announced the definitive business combination agreement with black check SPAC OceanTech Acquisitions I Corp. (Nasdaq: OTEC) with MJWL being the surviving Company listed on the Nasdaq with a combined business value of $333,360,290 on the signing of the Merger Agreement. We will be updating on MJWL when more details emerge so make sure you are subscribed to Microcapdaily so you know what’s going on with MJWL.

Disclosure: we hold no position in MJWL either long or short and we have not been compensated for this article.