Netlist, Inc. (OTCMKTS: NLST) is moving steadily northbound since making a massive reversal off $1.04 last week. NLST is one of the most exciting stocks we have reported on here at MIcrocapdaily (since it was sub $0.50) and we will be reporting on it when it up lists to NASDAQ a move that will double the current market valuation at least. Netlist is currently embroiled in patent infringement lawsuits against a number of businesses including Samsung, Google, and Micron. You can find out more info here and here. Everything changed in July of last year when the U.S. Court of Appeals for the Federal Circuit affirmed the U.S. Patent Trial and Appeal Board’s decision upholding the validity of Netlist’s U.S. 7,619,912 (‘912) patent that applies to DDR server memory modules.  NLST soared on May 5 after the Judge Richard Seeborg granted Netlist’s motion for summary judgement. This means that Netlist Inc. can pursue allegations that Google Inc. memory servers infringe its patented memory module technology.

As soon as NLST took off in summer 2020 many suggested it would drop down below a quarter again but it never did and just kept on going. Microcapdaily suggested in July that there were way too many good things happening here for Netlist not to keep rising and that is exactly what has happened. Watch the l2, there are plenty of buyers and not a lot of sellers. Netlist has been reporting one record breaking quarter after another recently reporting financial results for the third quarter ended October 1, 2022: Net product sales for the third quarter ended October 1, 2022 were $34.4 million, compared to net product sales of $26.7 million for the third quarter ended October 2, 2021. Netlist is one of the biggest runners Microcapdaily has ever reported on here on the website. We first reported on NLST on November 19, 2018 when the stock was $0.48 and it hit a high of $10.20 in July of 2021 up over 2000% since we first reported on it. We are expecting one day NLST could be a 10k% plus winner on the big boards since we first reported on it in 2018. Microcapdaily nominates NLST as the highest growth potential stock that we currently report on, this one could easily go into a whole new dimension and sub $2 per share is prime accumulation level territory you won’t get it much cheaper. Netlist holds a portfolio of 130 issued and pending U.S. and foreign patents, many seminal, in the areas of hybrid memory, storage class memory, rank multiplication and load reduction, among others. The strength of Netlist’s patent portfolio reflects its many years of research and development and track record of bringing disruptive new products to market. With state-of-the-art, wholly owned, ISO- and OSHAS-certified manufacturing and testing facilities in Suzhou, China, Netlist’s strategy is to marry its unique board-level intellectual property with a thorough understanding of semiconductor building blocks and system-level applications to deliver performance, cost, and time-to-market advantages to OEMs.

Netlist is led by CEO C.K. Hong, who brings over two decades of high-tech management experience to Netlist. He most recently served as President of Infinilink, a DSL equipment manufacturer, and as executive vice president of Viking Components, Inc. Prior to that, he spent 15 years with LG where he held various senior management positions in the U.S and Korea. Mr. Hong holds an MS in technology management from Pepperdine University and a BS in economics from Virginia Commonwealth University. As we have reported on in the past Netlist is currently suing Google, Micron and Samsung for patent infringement related violations. The financial prospects are so significant many have called it potentially the biggest patent infringement lawsuit in history however that’s saying a lot as there have been some big ones including Intel vs VLSI Technology (2021) – $2.18 Billion and Pfizer vs Teva Pharmaceuticals (TEVA) & Sun Pharma (2013) – $2.15B. Netlist biggest win so far was against SK hynix for around $40 million. They also sued Diablo Technology and put them out of business. They first sued Google back in 2009 over US Patent No. 7,619,912 or the ‘912 patent (seminal) a patent that describes an invention so impactful that it creates or shifts the technology space. According to Agni Research: “Netlist asserts that the ‘912 patent enabled Google to build servers with high capacity and rapid memory that allowed said servers to store an entire Oracle database in memory which allowed lightning-fast search results. The ‘912 patent played a large part in Google’s dominance in search.” 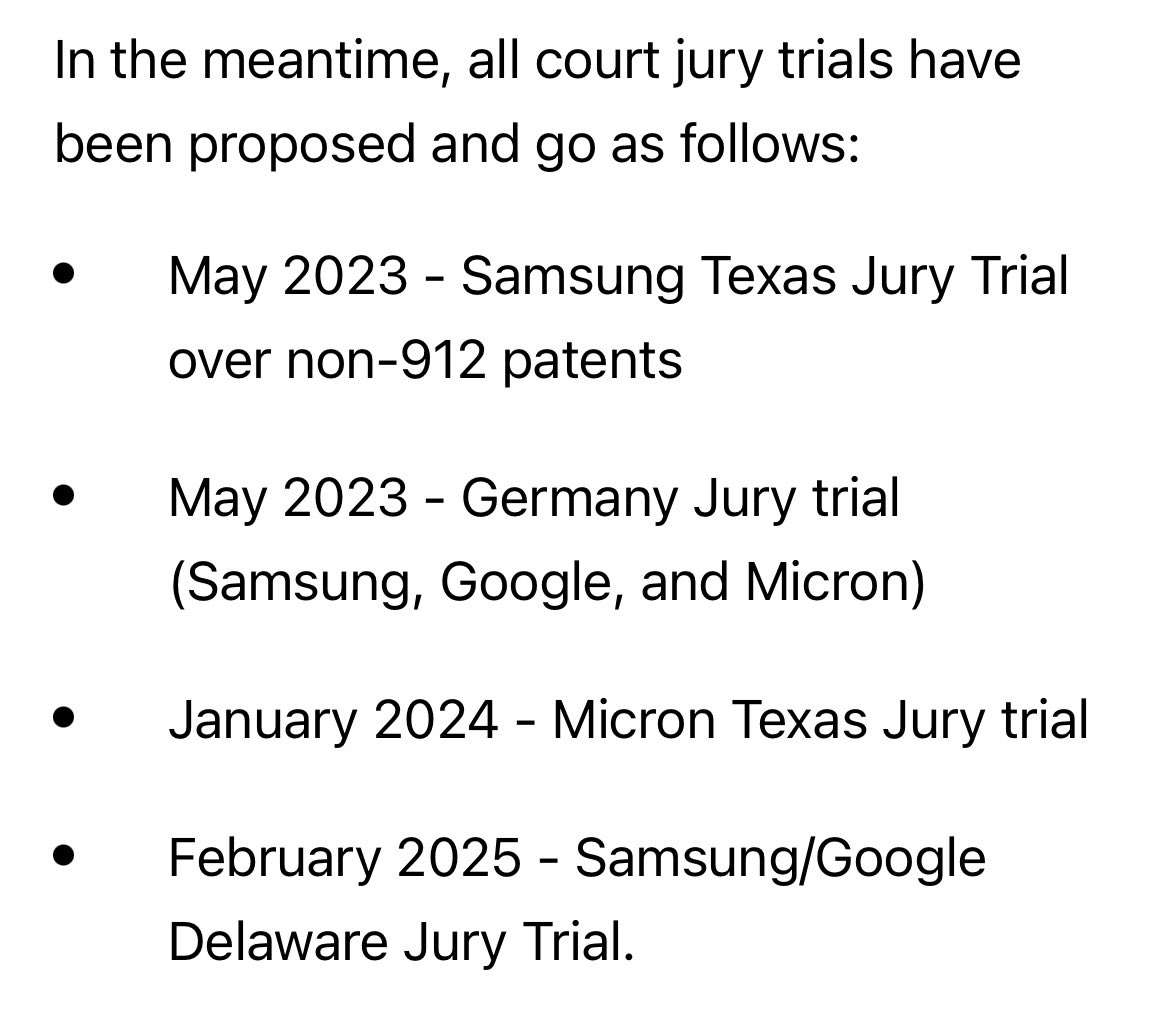 Google contested the validity of the 912 patent and, after nine years of legal disputes, the US Court of Appeals upheld a prior court’s decision that the 912 patent was valid. in 2020 Netlist sued Samsung and suspended the cross-licensing deal the Company’s had in place and Samsung countersued however that lawsuit was thrown out and Netlist is now suing Samsung for patent infringement in a Texas court. Netlist also won an important court decision in their favor in the Google case however as Samsung had supplied the patent-infringing memory modules to Google, the Judge decided things could wait while the court in the Netlist-Samsung case decided if Samsung had violated Netlist’s patent. More recently Samsung filed an amended complaint against Netlist which was dismissed and as the Company stated: “The partial dismissal means Samsung cannot pursue a separate action on the patents Netlist first asserted in Texas, and now cannot carry out its alleged obligation to protect Google from the ‘912 Patent in Delaware.” For more information on Netlist lawsuits go here.

Are you looking for #DDR5 samples for production? We have just the product for you! Introducing The Next Technology in #DRAM #JEDEC #CXL @JEDEC @pci_sig

Fill out the request for yours today!https://t.co/5zuJeymWKQ

“Netlist delivered double digit revenue gains from the year ago quarter and continues to execute on both its product and licensing strategies,” said Chief Executive Officer, C.K. Hong. “However, the quarterly results reflect the impact of the current over-supplied environment, which is expected to continue into 2023.”

Currently trading at a $320 million market valuation NLST has 232 million shares outstanding and an excellent balance sheet with $99 million in assets vs. $52 million in liabilities. Netlist traded over $10 per share with the same share structure in summer 2021 and since than the Company has seen dramatic improvements to its balance sheets. Netlist has been reporting one record breaking quarter after another as the Company’s semiconductor business has more than doubled over the past year. The upside on Netlist is enormous as the aggregate of the multiple infringement lawsuits Netlist is pursuing could very well yield the largest patent infringement settlements in history and we could see multiple resolutions within the next 6 months. There is little wonder why investors are accumulating heavily now that a major reversal northbound is underway.  We will be updating on Netlist when more details emerge so make sure you are subscribed to Microcapdaily.