Sunhydrogen Inc (OTCMKTS: HYSR) is making a strong move up in recent trading on a massive surge of trading volume as green energy and EV stocks heat up across the board. The stock saw highs of $0.0655 earlier this year and is currently making another run at it.

HSYR is fully reporting OTCQB and recently filed its 10k and its 10Q showing a cash position of $500,000. HYSR is no stranger to big moves seeing a historic rise back in 2014. With green technology on the docket HYSR the developer of a breakthrough technology to make renewable hydrogen using sunlight and water is getting noticed again by Investors.

Sunhydrogen Inc (OTCMKTS: HYSR) operating out of Santa Barbara, California is developing a breakthrough, low cost technology to make renewable hydrogen using sunlight and any source of water, including seawater and wastewater. Unlike non-renewable hydrocarbon fuels, such as oil, coal and natural gas, where carbon dioxide and other contaminants are released into the atmosphere when used, hydrogen fuel produces pure water as the only product. By optimizing the science of photoelectrolysis at the nano-level, our low-cost nanoparticles mimic photosynthesis to efficiently use sunlight to split water molecules into renewable hydrogen. Using the Company’s patented low-cost method to produce renewable hydrogen, Sunhydrogen intends to enable a world of distributed hydrogen production for renewable electricity and hydrogen fuel cell vehicles.

The nanoparticle, structured as an autonomous nano-solar cell with catalysts, splits water into oxygen and hydrogen. Billions of the nano-solar cells are encapsulated in an array inside a square centimeter protective layer. The technology is designed to be manufactured using a low cost industrial roll-to-roll electrodeposition process. After cells are deposited and coated in the electrodeposition process on a metal substrate, the substrate is inserted into our proprietary solar hydrogen panel design. We have protected this process with patents in the US, Europe, Australia and China with pending grants in other countries. The Company has 3 patents granted for this technology including “Photoelectrosynthetically Active Heterostructures” US Patent Publication No. US9593053 B1 (Granted in US) “Methods for Manufacturing Photoelectrosynthetically Active Heterostructures” US Patent Publication No. US20170141258 A1.  (Granted in US) “Multi-junction artificial photosynthetic cell with enhanced photovoltages” US20160076154 A1.  (Granted in US, Australia, China and Europe)

HYSR is at the right place at the right time; The global hydrogen generation market is set to gain traction from the high demand for fuel cell-based buses and electric vehicles (EVs), especially in North America and Asia Pacific. In December 2019, Hyundai, for instance, planned to invest around USD 6 billion in the development of hydrogen fuel cell technology to increase the sales of electric vehicles worldwide. According to a report from Fortune Business Insights™ the hydrogen generation market size was USD 142.33 billion in 2019. It is projected to reach USD 208.86 billion by 2027, thereby exhibiting a CAGR of 5.2% during the forecast period. 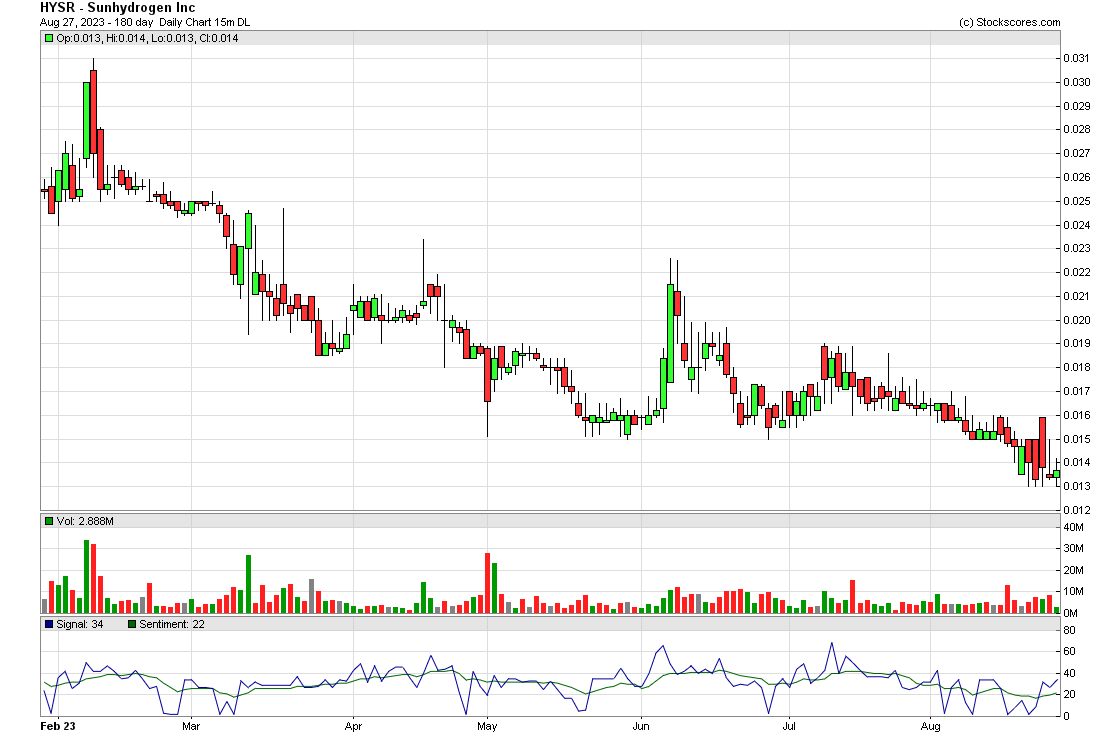 Sunhydrogen is building a pilot production plant to commercially produce Gen 1, from water and waste to Fuel. The stock took of last month after HYSR said it is prepared to begin manufacturing the first series of its GEN 1 hydrogen panels for demonstration. The Company said it plans to begin production on 100 units to start. As the team approaches manufacturing of Gen 1, it will begin to funnel greater resources to the development of Gen 2, a nanotechnology solution to hydrogen production that management believes can completely change the economics of hydrogen production and thus the global energy playing field. The Company also received an equity investment of up to $4 million from GHS Investments, LLC, of Jericho, New York. The proceeds from the investment will be used to accelerate the development of the Company’s nanoparticle hydrogen production technology and other strategic initiatives. GHS Investments is a privately held fund focused on small to mid-cap Companies. GHS is industry agnostic and focuses on “super value” companies with a good operating entity and a strong management team.

Currently making a poweful move up the charts HYSR is an exciting story developing in small cap; The Company is the developer of a breakthrough technology to produce renewable hydrogen using sunlight and water. HSYR is fully reporting OTCQB and recently filed its 10k and its 10Q showing a cash position of $500,000. HYSR is no stranger to big moves seeing a historic rise back in 2014. With green technology on the docket HYSR the developer of a breakthrough technology to make renewable hydrogen using sunlight and water is getting noticed again by Investors.We will be updating on HYSR when more details emerge so make sure you are subscribed to Microcapdaily so you know what’s going on with HYSR.