Stemtech Corp (OTCMKTS: STEK) continues to fall further recently hitting lows of $0.24 per share now that the massive July/August google adds to a landing page promotion is over. At the top of the promotion in August at $11.50 per share STEK reached a market cap of over $1 billion USD, an astronomically high number considering the Company has minimal assets, $33 million in liabilities and averages a little over $1 million in revenues per quarter. We warned investors STEK would end up where it is now in our article in August starting: STEK is a major league promotion from some heavy hitters that could easily go much higher but when the bottom falls out, it could drop fast.”

In our last article in September on STEK we reported: “We think STEK could continue to move lower and will eventually trade below $0.25 per share. According to management they have no idea what’s going on stating in a recent press release: “they were notified by OTC Markets of a foreign stock promotion which we were unaware of, and provided Stemtech Corporation with a copy of an article from a UK web site called “World Finance”, which emphatically predicted share price appreciation in the Stem Cell arena in general, and our Company in particular. Earlier this year, before STEK rocketed to $11.50 per share debtholders got a sweetheart deal according to the filing: “by agreement of all then existing debt holders and old management, all pre-existing debts were converted out to 6,000,000 shares, which equates to $0.09 per share. “ 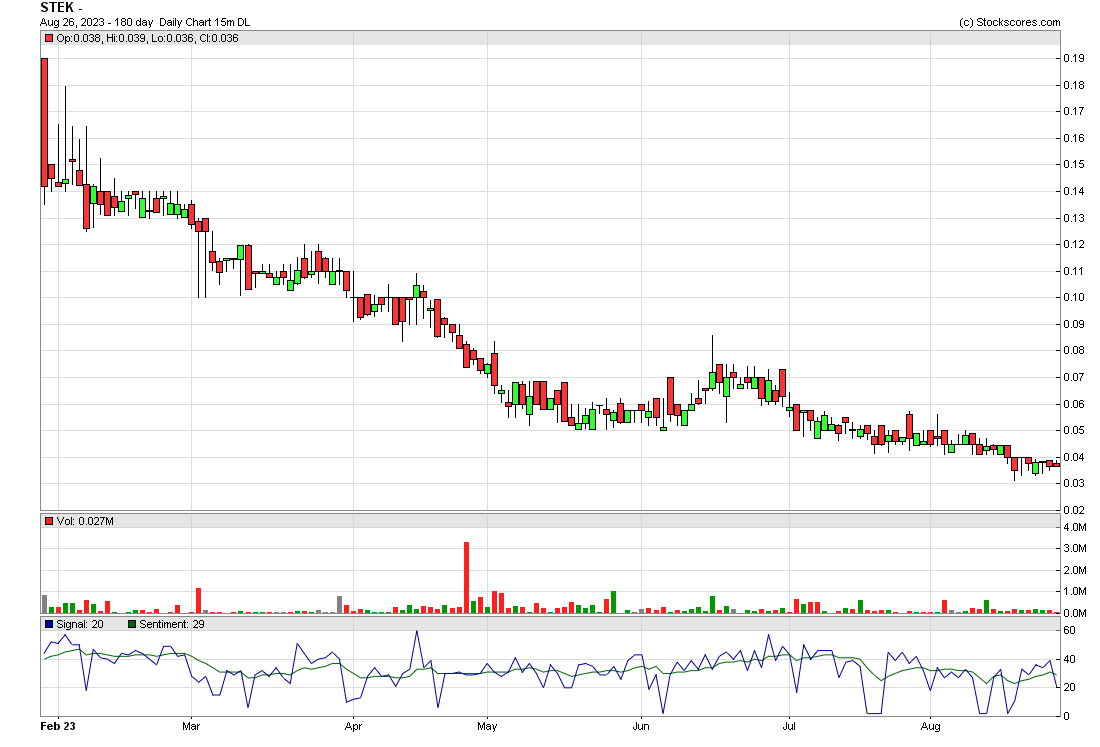 Earlier this year the Company acquired Life Factor Research, a leading manufacturer in the nutraceutical world. Charles Layton, CEO of Life Factor Research commented that “from our beginnings, Life Factor Research has held fast to our foundational concept of creating nutraceutical products that through their proprietary nature and scientific proof create lasting change for our clients and their customers. During our progress in the highly expanding anti-aging space, we have had a core desire to align ourselves with the right “strategic partner”, and with great pride and anticipation of what is to come we are most grateful to be able to announce our alignment with Stemtech Corporation. Over the last year our team has had the opportunity to get a deep understanding of Stemtech’s core values in the Stem Cell rejuvenation space and at the same time gain an appreciation for the distribution channels that will now be reached as a result of this union. LFR has aggregated tremendous proprietary compounds, formulations, delivery and absorption technologies as well as patents that will be introduced into the market in truly revolutionary products which will, in some cases, be category creating. As the CEO of Life Factor Research, it would be impossible for me to overstate our collective potential in a space that is experiencing growth at a level which has been exploding year over year.”

On November 7 STEK re-iterated the growing scientific understanding of the significance of stem cells as a key benefit in health. This is validated by the amount of funding in R&D efforts underway as reported by Research and Marketing publication. More businesses are realizing the opportunity for helping people as well as profitability, something Stemtech saw over 17 years ago when they created and opened their commerce in the stem cell nutrition sector.

Stemtech Corporation President and Chief Operating Officer, John W. Meyer, said “Stemtech strategically focuses on the creation of new and cutting-edge stemceuticals, including skin care, anti-aging, natural well-being and longevity with emphasis on the use of the bodies’ own stem cells to facilitate better health, rejuvenation and overall wellness. Stemtech now has Life Factor Research (LFR) as our R & D division for development of new products for an ever-growing market interested in improved quality of life and better health. Improving internal health and external wellness is our strategic direction. The first new Stemtech skincare product designed by LFR will be unveiled at the December Cancun leadership event, with more to follow in 2023. Stemtech has always known that the field of stem cells would gain momentum, whether via biotech or pharma seen by the expansion of research as reported by Research and Marketing, where investment funding is expected to grow from $1.9 billion in 2022, to an estimated $4.5 billion by 2027.”

Investment bankers Tully & Holland, opine that “A long-running socioeconomic shift toward increased health consciousness was further accelerated during the pandemic. Consumers realize that there is simply no substitute for good health and are increasingly focused on treating their bodies with greater care and respect. Whether through diet, exercise, or a combination of both, supplement consumption is a core tenant of this perception.” They go on to say “this has opened a market for producers to specialize products at the individual consumer level and created a new wave of innovation.” Stemtech has been focused on this since 2005. Stemtech is listed as one of 25 publicly traded companies in this market space by Tully & Holland.

Cliff Layton, CEO of Stemtech’s Life Factor Research Division, says “LFR has aggregated tremendous proprietary compounds, formulations, delivery and absorption technologies as well as patents that will be introduced into the market, truly revolutionary products which will, in some cases, be category creating. The collective potential in a space that is experiencing growth at a level never seen before will enable Stemtech to continue to be a leader in the stem cell technology market and much more.”

Currently trading at a $13 million market valuation, STEK OS is 48,625,346 and the float is around 11 million shares. STEK is an SEC filer and fully reporting OTCQB. The Company has just over $500,000 in the treasury and $5.1 million in assets vs. $30 million in liabilities. STEK was a major league promotion in July/August via google adds to a landing page promoting Stemtech Corp. Now that the promotion is over the stock has continued to move lower recently hitting lows of $0.24 per share. STEK has a major debt problem and this debt continues to be converted into stock by 3rd party’s with the OS increasing by over 4 million shares just in the past 2 months. As new shares continue to flow into the market the price per share will continue to drop lower. We will be updating on STEK when more details emerge so make sure you are subscribed to Microcapdaily.