Cool Technologies Inc (OTCMKTS: WARM) has seen a fast rise up the charts from well under a penny to highs of $0.03 per share. From illiquid WARM has transformed and is quickly attracting a growing shareholder base.

The move up on WARM comes as the overal markets have been in steep decline as the coronavirus has spread to new countries. Just this week the Dow has lost over 4000 points including its largest point drop ever on Thursday.

Cool Technologies Inc (OTCMKTS: WARM) bill itself as an intellectual property and product development company commercializing a mobile power generation system and patented thermal dispersion technologies across multiple platforms. Cool Technologies has spent years designing and developing its technologies. The core technologies are: Thermal Dispersion – patented technologies (totally enclosed heat pipe cooled and radial vent) that deliver liquid-cooled results for rotating equipment, multi-plate clutches, brakes and rotors without the use of liquid. Liquid cooling is the best, most effective cooling system for electric motors, however, it is also the most expensive. the Companies technologies reduce the cost of rotating equipment by eliminating the active material and, otherwise, extra components that liquid cooling requires. Our technologies also reduce production costs by increasing the power densities of the rotating equipment which enables them to output the same power from a smaller package.

Mobile Power Generation — a patented and patents pending in-chassis system that outputs electrical power in amounts equal to or greater than skid-mounted generators or tow-behind generators from a smaller, lighter, more efficient package.

CYDY mobile power generation system retrofits onto new or existing Class 3 to 8 work trucks and enables them to output up to 200 kVA of electric power. The Company’s thermal dispersion technologies make products such as motors and generators, pumps and compressors, and various other machines that require cooling, more efficient and increase their capability to output more power. Tested and validated by two third parties, the Company’s cooling system eliminates the need for costly modifications and improves power density by as much as 40% — meaning more power output at a lower cost. The Company has additional patents for various OEM applications of its proprietary heat removal technologies for fans, bearings, brakes and clutches as well as patents-pending for a variety of other OEM applications and industries. 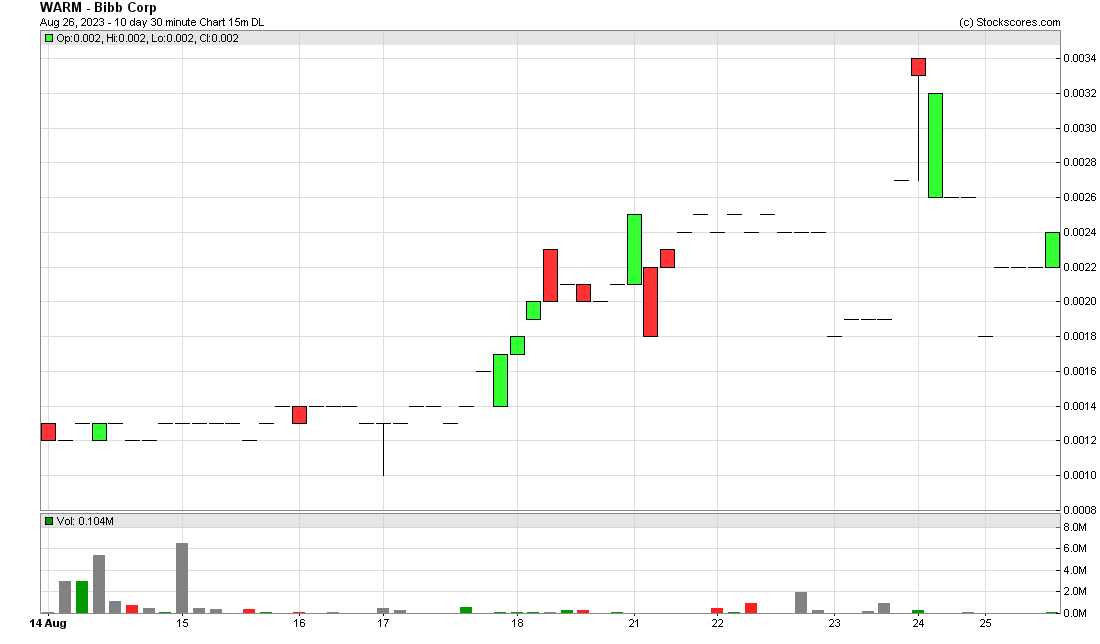 In January WARM bod elected Steven Wilburn as a new external member. Steve is also the founder, Chairman and CEO of FirmGreen, Inc., and founder and managing member of VerdeWatts, LLC. FirmGreen’s patented landfill emission cleanup process converts biogas into compressed natural gas (CNG) fuel. His company has subsequently added proprietary patented water treatment technology to its product mix. He also invented the VerdeVault Energy Storage System for solar and battery powered technologies, then founded VerdeWatts to commercialize it.  VerdeWatts currently has over $212 million in renewable energy and energy storage projects in development. One is a contract to develop and operate a 65 megawatt solar hybrid plant with 240 megawatt hours of battery storage in Nigeria.

After reviewing the Company’s technologies, Steve put forth a new application for CoolTech’s Mobile Power Generation System: make it an integral part of mobile microgrids to power farming villages throughout rural America and the developing world.  VerdeWatts solar panels and battery storage systems would provide the sustainable energy. MG Systems would recharge or back-up the microgrids and simultaneously power FirmGreen water purification and desalination systems.

Steve Wilburn stated:“The combination of CoolTech, VerdeWatts and FirmGreen technologies can be transformative for the health, livelihoods and economies of communities all over the world.  Congress has mandated that the bank fund projects that benefit the environment and I believe this fills the bill. Furthermore, the synergy between our companies can be quite beneficial to both. In Latin America, CoolTech has incorporated our products in their projects. I see the same kind of pull through likely as we add their technology to our current and future projects.”

Currently trading at a $2.4 million market valuation WARM has little cash, is pre revenue and has $5.9 million in current liabilities which has caused massive dilution here in the past. WARM is an exciting story developing in small caps – the Company just got mover and shaker Steve Wilburn on board who just put forth a new application for CoolTech’s Mobile Power Generation System: make it an integral part of mobile microgrids to power farming villages throughout rural America and the developing world.  VerdeWatts solar panels and battery storage systems would provide the sustainable energy. MG Systems would recharge or back-up the microgrids and simultaneously power FirmGreen water purification and desalination systems. Steve also made some bold statements on twitter which probably have a lot to do with the recent price action.  We will be updating on WARM when more details emerge so make sure you are subscribed to Microcapdaily so you know what’s going on with WARM.