Sun Pacific Holding Corp (OTCMKTS: SNPW) is moving steadily higher in recent trading and investors are starting to take notice. The stock is a proven runner with a long history of big moves skyrocketing from $0.0003 to highs of $0.00884 at the end of last year. When a penny stock like SNPW heats up; investors pay attention.

SNPW has been under accumulation in recent weeks moving steadily up the trend line since its spike up in June. It’s easy to get excited about Sun Pacific which has a number of multi-million dollar projects underway including a cutting edge Medical Recycling Power Plant in Rhode Island as well as the Company’s partnership to develop a recently expanded  50 Megawatts solar project in Durango, Mexico.

The Company owns a valuable patent portfolio related to solar including patents on various innovations relating to improved photovoltaic (PV) solar power panel constructions, proprietary methods of manufacture, and production line systems to be used during the planned manufacture of solar power in high volume production environments. The Company is constantly expanding on its patent portfolio reporting last year it has filed three (3) additional applications for patent. 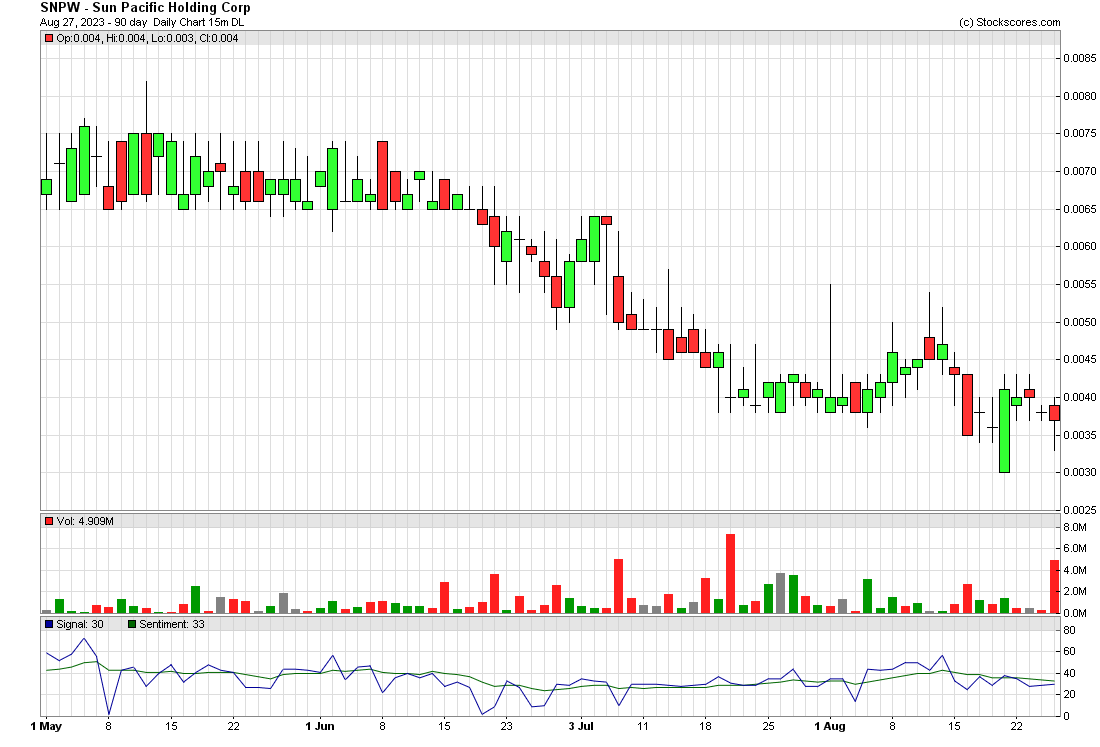 Microcapdaily reported on SNPW for the first time on February 5 2020 stating: “Sun Pacific Holding Corp (OTCMKTS: SNPW) was the place to be in the last months of 2019 which saw the stock make a significant move from an $0.0003 start to highs over $0.007. Since than SNPW has lagged and Investors are looking for another move up.”

In an update in May SNPW said its proposed Solar Project in Durango continues to make forward progress. The proposed solar farm to be located in Durango, Mexico has been expanded to 50 Megawatts. Power Purchase agreements and letters of intent with future users have been entered into that exceed the operating capacity of the proposed solar farm. Proforma financial information and plans for up to $90 million in funding have been circulated to several interested parties for review and due diligence with the Company through a wholly owned subsidiary has proposed an increase in its initial ownership equity position of thirty five percent of the project’s operating company as part of its development efforts.

Medrecycler RI, Inc. has continued to make progress with the various regulatory approvals needed to operate a medical waste to energy facility in West Warrick, RI. Medrecycyler’s proposed thermal process for medical waste destruction was approved and declared truly Pyrolysis by the (EPA) Environmental Protection Agency. National Grid in Rhode Island has approved the electrical connection to the existing service for the operational processes for the Medrecycler facility. Medrecycler has also received from the Rhode Island Department of Environmental Management (“DEM”) the final draft permit approval for air quality. Medrecycler is currently in the final stages of completing and submitting an industrial hygienist report, along with various other replies for requested information from the Rhode Island DEM as it works to complete the final request of information for its operating permit.

$SNPW is one of the most undervalued stocks on the OTC at its current pps levels. The company has several multi-million dollar projects coming into play for 2020 in the expanding fields of clean energy and recycling technologies. #Cleanenergy #solarenergy #FrontPageStocks https://t.co/bicAwCR0H7

Currently moving steadily higher SNPW is an exciting story developing in small caps – Focused on building a “Next Generation” green energy company, Sun Pacific owns a number of valuable patents related to solar. The Company currently has a number of multi million dollar projects underway including  a cutting edge Medical Recycling Power Plant in Rhode Island as well as the Company’s partnership to develop a proposed and recently expanded  50 Megawatts solar project in Durango, Mexico. SNPW has legions of shareholders, plenty of liquidity and is a proven runner with a long history of big moves. When a penny stock like SNPW heats up; investors pay attention. We will be updating on SNPW when more details emerge so make sure you are subscribed to Microcapdaily so you know what’s going on with SNPW.