SPO Global Inc. (OTCMKTS: SPOM) went into full beast mode in February running from just over a penny to highs of $0.68 per share after the Company announced the definitive merger agreement with Gerpang Healthcare Group of Shandong, China. Since than SPO Global closed the merger but the stock has lagged and investors are wondering what comes next.

There is a lot to get excited about on SPOM; according to SPOM press release Gerpang Healthcare Group has a staff of over 220 people, more than 10 international and national patents, and an annual turnover of approximately RMB 1 billion & SPOM has a fairly tight float and 188mm OS as of February 27. The stock has attracted a significant shareholder base.

According to its website:  GP Healthcare Group is located in Jinan Pharma Valley Industrial Park, High-tech District. It is an innovative technology-based private and high-tech enterprise. The group was founded by School of Pharmaceutical Science of Shandong University Prof. Fengyou Lu. Mr. Lu possesses 24 years of market operating experience in pharmaceutical market in the Greater China region, and has successfully run four foreign-funded enterprises and large private enterprises. The main business scope of the Group includes bio-pharmaceutical R&D, development and sales of medical informatization software, medical high-tech introduction, production and sales of medical quality supplies, dietary supplement, medicine, as well as agents and sales of medical equipment supplies. There are 220 staff. Besides the Group had more than 10 international and national patents, and its annual turnover nearly reaches RMB 1 billion.

To Find out the inside Scoop on SPOM  Subscribe to Microcapdaily.com Right Now by entering your Email in the box below 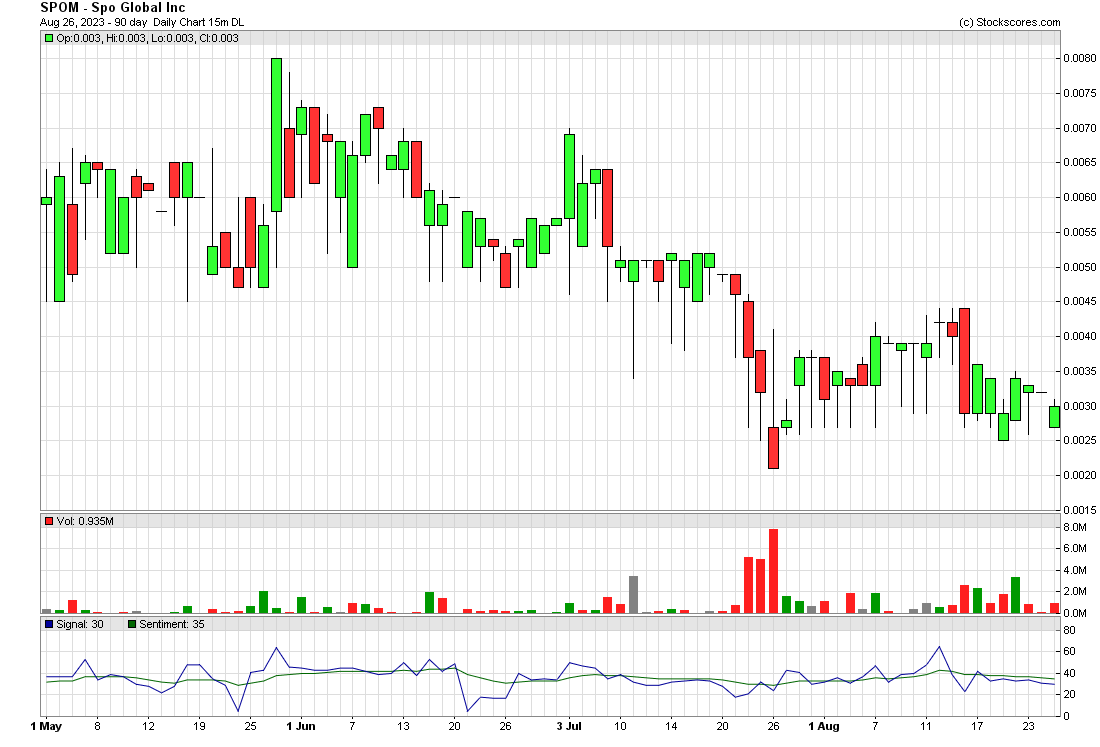 IHT Bioscan SRT can detect nine systems of the human body, all of which can quantify physiological and biochemical indexes. It is portable and easy to carry. The detection time is 20-30 minutes. Routine physical examinations include CT, MRI, blood sampling, urine routine, etc. It is aimed at the detection of whether the organs are generator qualitative lesions, characterized by late detection time, slow recovery, bringing huge economic and mental burden to individuals and families. IHT Bioscan SRT can detect the early dysfunction of each organ, evaluate the self metabolism and repair ability of the body, quantify the risk, intervene as early as possible, and avoid diseases.

$SPOM – I just ordered documents from DE SOS online. The AS has not changed since last filing on OTC Markets. It's still 400 million. There are no new filings with DE SOS related to share structure changes. The update on OTC Markets today was not TA verified. Must be typo. pic.twitter.com/bVxp5ruwNB

Microcapdaily reported on SPOM on February 13 when it gained 600% in one-day stating at the time: SPO Global and Gerpang Healthcare Group (OTCMKTS: SPOM) was up over 600% in afternoon trading after the Company announced it has signed a definitive agreement to acquire Gerpang Healthcare Group of Shandong in a reverse merger agreement. Gerpang has a staff of over 220 people, more than 10 international and national patents, and an annual turnover of approximately RMB 1 billion. This is huge news for SPOM which was liquid and had drifted to $0.0113 lows in recent weeks – the news has transformed SPOM into a fast runner and a volume leader.

Currently trading at a $4 million market valuation SPOM is virtually debt free with a fairly tight stock structure with Authorized shares at 400 million, and OS at 188 million as of February 27. The new Company Gerpang Healthcare Group of Shandong, China says they have a staff of 220 people, more than 10 international and national patents, and an annual turnover of approximately RMB 1 billion. The stock has quickly attracted a loyal shareholder base that believes this one goes higher. We will be updating on SPOM on a daily basis so make sure you are subscribed to microcapdaily.com so you know what is going on with SPOM.

Disclosure: we hold no position in SPOM either long or short and we have not been compensated for this article.