The Remarkable Rise of Netlist, Inc. (OTCMKTS: NLST) and the (‘912) Patent

Netlist, Inc. (OTCMKTS: NLST) is among the most exciting and dynamic stories on the OTCQB that has skyrocketed out of obscurity in recent months to become a volume leader in small caps. The move up comes after the U.S. Court of Appeals for the Federal Circuit affirmed the U.S. Patent Trial and Appeal Board’s decision upholding the validity of Netlist’s U.S. 7,619,912 (‘912) patent that applies to DDR server memory modules. NLST CEO C.K. Hong stated at the time “We are very pleased that in the end the appellate court made it clear that the claims of this seminal patent are indeed valid and in so doing, further vindicate our decade-long defense of the company’s strategic intellectual property. We will now move to lift the stay in the patent infringement lawsuit against Google in the U.S. District Court for the Northern District of CA., in order to recover current and past damages related to the ‘912 patent.” While things have been delayed a few months due to coronavirus the ruling has much larger implications than just GOOG which will more than likely set the tone for other settlements long overdue here.

NLST recently announced Q2 results reporting $10.9 million in revenues for the quarter. CEO C.K. Hong stated: “During the second quarter we delivered solid financial performance with revenue almost doubling and bottom line improving close to 50% from the year ago period. We also achieved a milestone victory against Google, as the U.S Court of Appeals for the Federal Circuit affirmed the Patent Trial and Appeal Board’s final decision, validating Netlist’s ‘912 patent. The positive outcome after a ten-year fight against Google in defense of this seminal patent puts other unauthorized users of our intellectual property on notice.”

Netlist, Inc. (OTCMKTS: NLST) provides high-performance modular memory subsystems to customers in diverse industries that require enterprise and storage class memory solutions to empower critical business decisions. Netlist has introduced many new disruptive products such as one of the first load reduced dual in-line memory modules which has been adopted by the industry for DDR4 LRDIMM. The Company was one of the first to bring NAND flash memory to the memory channel with its NVvault non-volatile dual in-line memory modules. Netlist offers storage class memory products called HybriDIMM to address the growing need for real-time analytics in Big Data applications. 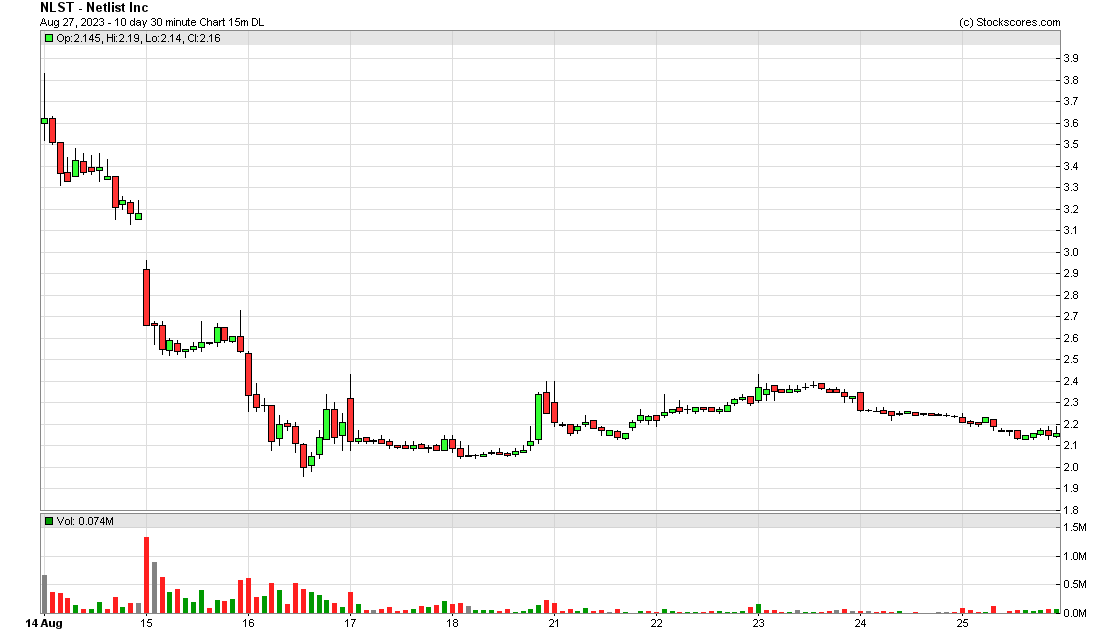 Netlist is also a reseller of solid state drive, mNAND flash, DRAM products and other component products to end-customers that are not reached in the distribution models of the component manufacturers. Netlist is fully reporting OTCQB and has executive offices located in Irvine, California and manufacturing facilities in Suzhou, People’s Republic of China as well as an engineering design center in Silicon Valley, CA.

The Company has built a valuable and lucrative portfolio of over 130 issued and pending U.S. and foreign patents, many seminal, in the areas of hybrid memory, storage class memory, rank multiplication and load reduction. Netlist has been monetizing its intellectual property through a combination of product sales and licensing, royalty and other revenue-producing arrangements.

Currently trading at a $101 million market valuation NLST is among the most exciting and dynamic stories on the OTCQB that has skyrocketed out of obscurity in recent months to become a volume leader in small caps. Netlist recently reported solid financial results announcing $10.9 million in revenues for the quarter nearly doubling revenues for the same period last year. The Company achieved a milestone victory against Google, as the U.S Court of Appeals for the Federal Circuit affirmed the Patent Trial and Appeal Board’s final decision, validating Netlist’s ‘912 patent. The ruling has much larger implications than just GOOG which will more than likely set the tone for a number of long overdue settlements for Netlist.  We will be updating on Netlist when more details emerge so make sure you are subscribed to Microcapdaily so you know what’s going on with Netlist.